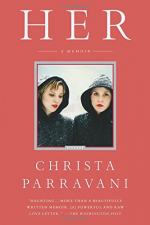 Her: A Memoir Summary & Study Guide

Her: A Memoir Summary & Study Guide includes comprehensive information and analysis to help you understand the book. This study guide contains the following sections:

This detailed literature summary also contains Topics for Discussion on Her: A Memoir by Christa Parravani.

“Her” is the story of identical twins – Christa and Cara Parravani. Her is a memoir that contains the writings and memories of both sisters. Cara died from a drug overdose when the twins were 28. While Christa wrote the majority of the memoir, Cara’s thoughts and version of events are also included. Cara had been writing her own memoir before her death. To bring Cara’s voice into her story, Christa included excerpts from some of Cara’s unfinished book. The story focuses on the very close relationship that only identical twins can share and the confusion, angst and identity crises that occurs when one twin dies tragically and way too young.

Christa touches on the life that she and her sister shared as young girls, teenagers, college students and finally as professionals. As twins do, especially girl twins, they did everything together and shared their deepest dreams and secrets. In the case of twins, the larger twin is generally born first and often winds up being the dominant twin. Cara was born first and was the larger baby and she maintained a weight advantage over her sister as adults. Christa had always deferred to Cara in silent acknowledgement that she was the stronger one. But over the years, Cara demonstrated her weakness by first succumbing to prescription drugs and eventually to the lures of cocaine and heroin.

After being brutally beaten and raped, Cara’s life was never the same. She deteriorated and spiraled down and her addictions became solidified and more profound. Cara also became very needy and relied on Christa to be there for her. Cara, in fact, wanted Christa to be with her every minute. The girls were both married and Cara’s obsession to be with her sister put a strain on their marriages with both eventually resulting in divorce. Christa went out of her way to support Cara in every way even though it placed undue stress on her personal and professional life.

The book begins with Christa looking in the mirror after Cara’s death and not recognizing herself. She saw Cara instead of herself. In an effort to not let go of her twin and bring her sister back, Christa began to dress in her clothing, take prescription drugs and become promiscuous, often dating Cara’s old boyfriends although she was still in a marriage. Her life was heading to the same dark abyss that Cara’s life had ended in. At one point, she even contemplated committing suicide.

In the end, it was writing and her desire to be a successful writer that helped save Christa. Christa wanted to settle down and have a family. But she knew that in order to achieve her goals, she would have to have a clear head and be drug free. She managed to withdraw from Valium by herself. After she had shaken her habit she was able to see the world as it was and achieve resolution and understanding about her identity, her sister’s death and a new perspective of their relationship that was on a much deeper level.

Her: A Memoir from BookRags. (c)2022 BookRags, Inc. All rights reserved.