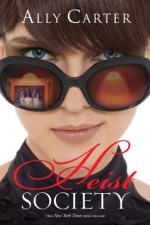 Ally Carter
This Study Guide consists of approximately 27 pages of chapter summaries, quotes, character analysis, themes, and more - everything you need to sharpen your knowledge of Heist Society.

Heist Society by Ally Carter is the story of Katarina (Kat) Bishop. Kat is an average teenage girl in all aspects except for one - she comes from a long line of master thieves. In the beginning of the story, Kat is being expelled from the Colgan School, a prestigious ivy league prep school, for placing the headmaster's Porsche on top of the school fountain. Kat has been framed by certain people in her life who want her back in the game. Kat had conned her way into Colgan with the intention of using her education to get out of the family business for good. Kat does not react well when it is decided that she will leave Colgan and return to a life of crime. Suddenly, Kat is torn between loyalty to her family and wanting a better life for herself - one of normalcy and stability - a life that will allow her to sleep in the same bed every night and know what she will be doing each day. The life of a thief is transitory and unpredictable. Kat has had her fill of that life.

Kat learns that she has been pulled away from Colgan because of a message from her great uncle Eddie, a master thief. Something has gone terribly wrong with her father. A powerful and evil man, Arturo Taccone, has accused Kat's father, Bobby Bishop, of stealing five paintings from his villa in Italy. The paintings are priceless masterpieces. Kat knows that her father did not steal the paintings but cannot convince Taccone. Taccone tells Kat that she has two weeks to return the paintings or she will never see her father again. Kat has no choice.

Kat partners up with her long-term friend, Hale, her cousin Gabrielle and other members of her heist family, including Simon, Angus and Hamish Bagshaw, and on the periphery, Uncle Eddie. Uncle Eddie warns Kat to stay away from Taccone. The job is simply not possible and Kat could get hurt. While Uncle Eddie is supposedly not a part of the caper, he keeps a watchful eye on Kat.

The heist society begins an almost impossible mission. Along the way, they travel around the world to Rome, Paris, London and New York. Taccone keeps close tabs on the group as they make progress. A mysterious thief using the pseudonym Visily Romani is also hot on the trail and throws a wrench into the works. It is learned that Romani had stolen the paintings from Taccone with the hopes of liberating the pieces which had been stolen by the Nazis. Romani had placed the paintings inside the world's most secure museum. Now Kat and the crew must figure out how to rob it.

Kat does succeed although there is interference from Interpol that almost causes her and her father to get caught. Four of the five paintings are saved and returned to their rightful owners or museums. The fifth is delivered to Kat by Romani, along with his respect.

Kat manages to frame Taccone and have him arrested, absolving her father from any guilt.

In the end, Kat realizes that she is happy within her family. Although Kat is not a master thief, maybe someday she could be.

More summaries and resources for teaching or studying Heist Society.