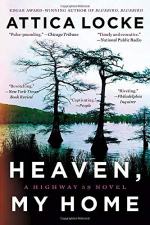 Attica Locke
This Study Guide consists of approximately 56 pages of chapter summaries, quotes, character analysis, themes, and more - everything you need to sharpen your knowledge of Heaven, My Home.

This detailed literature summary also contains Quotes and a Free Quiz on Heaven, My Home by Attica Locke.

The following version of this book was used to create the guide: Locke, Attica. Heaven, My Home. Mulholland Books, 2019.

Heaven, My Home opens with an epigraph which reads, "Like a tree planted by the water, / I shall not be moved", a lyric attributed specifically to "when Jessie Mae Hemphill sang it" (i). The novel is divided into six sections: four numerated parts and geographically-specific prologue and epilogue. The first part, titled "Marion County," establishes east Texas in 2016 as the temporal setting. It also introduces the mystery aspect of the novel: from a present-tense, limited-omniscient perspective, the reader learns of the night that nine-year-old Levi King was out on Lake Caddo when a stranger approached him in his grand dad's boat, just as the engine died.

The perspective shifts with Part One, introducing Texas Ranger Darren Matthews and his previous exploits in the proceeding novel Bluebird, Bluebird. Maintaining limited-omniscient narration throughout while switching to past-tense, the reader is dropped into Darren's precarious world as a black Ranger. Newly reinstated as a Ranger after being suspended due to his involvement in covering for an elderly black family-friend named Mack, Darren relished the newfound stability of his life. His wife had not asked too many questions since his return from Lark and welcomed the way Darren was mending his relationship to his mother. But as Darren reveals when he breaks into his mother's trailer in Camilla, the kowtowing to his mother's was because she has possession of the murder weapon from the Lark case and therefore the ability to blackmail her son.

One night Darren invited five other Rangers to the Matthews family home in Camilla. They ate barbecued meats and Darren drank copiously for the first time in months. When the other Rangers passed out, Darren drove over to his mother's and broke in with the hopes of finding the gun, but the search was cut short when a deputy sheriff came to check in about a reported break in. When his lieutenant called him in for a meeting the following Monday, Darren was on edge. But it turned out he was being assigned to the case of a missing nine-year-old kid, the son of an Aryan Brotherhood member, Bill "Big Kill" King. Darren left Houston and on the drive east along Highway towards Marion County he read over letters that the missing boy's father, Bill King, had written to the Governor from prison.

After passing by the county courthouse to meet Deputy Briggs, the pair made their way to the hamlet of Hopetown to stop by the trailer of Marnie King and Gil Thomason, Levi's mother and stepfather. Gil and a man from a neighboring trailer made racist comments about Darren while Marnie implored him to find her son. She insisted that Darren ought to talk to Levi's grandmother, Bill King's mother. When they were about to drive to see the grandmother, Rosemary King, a group of three men on horseback approach Darren, Deputy Briggs, and Sheriff Quinn. Two were Native American and one was Black, and Darren learned that their ancestors were the original habitants of Hopetown.

Once in Rosemary King's Victorian colonial manor the old woman proved to be unhelpful and seemingly unconcerned with her grandson's whereabouts. Her lawyer was present for the meeting and her main focus while talking to Darren was the prospect of her son's early release from jail. Rosemary owned the Cardinal hotel in Jefferson where Darren stayed during his trip, assuring he got one of the best garden suites. They searched Rosemary's house but found nothing. That night, Darren snuck off to Gil and Marnie's trailer to ask for a picture of Levi to show to people who lived up the way, in what people called "N-word Town" (87). With a picture of an angry little boy in hand, Darren set off to the original settlement of Hopetown. Leroy Page, the old black man Darren had seen riding a horse, lived in a manicured cottage. Mr. Page said he saw Levi locking up his granddad's boat on Friday night, meaning he was the last person to see the boy before he went missing. Their conversation became progressively tense and by the time Darren left, Mr. Page was acting cagey and said he would have a lawyer next time Darren came by.

Once back at the hotel, Darren phoned his uncle Clayton, who he called "Pop" because he was raised by Clayton and his twin brother, William. Darren asked Clayton to pay his mother Bell's rent. Then he phoned Mack, who said that the district attorney, Vaughn, had been by his place. Once in his hotel room, Darren was surprised to find his best friend, Greg, in the room. Greg worked for the FBI documenting hate crimes and was in Jefferson with the suspicion that what happened to Levi King was anti-white racism, an idea that horrified Darren.

That night, Darren was woken up by the sounds of an altercation in the room above him, but, when he went up to investigate, he only found a man named Sandler Gaines who said he had not heard anything. As it turned out, Gaines was the person buying Hopetown. In the morning, Darren went to the front desk and learned that the woman who had been in the room that he had noises in had checked out the previous evening.

Darren obtained a warrant to search Marnie and Gil's trailer and the couple was carted off to jail for separate infractions. Darren spoke to Dana, Levi's sister, who said she would have seen her brother come home that Friday night and therefore believed that Mr. Page was lying. Darren then went to speak to Gil and Marnie in their separate holding cells although neither conversation was productive. That second day in Jefferson, Darren came back to his hotel room and found Lisa on the bed. The two had sex and then Lisa grilled him about what was happening with his mother. During her visit in Jefferson, Darren noticed there was romantic tension between Greg and Lisa and he comes to the conclusion they have had an affair.

On his fourth day in Jefferson, new element of mystery is introduced when Darren puts clues together and realized that Mr. Page's lawyer has gone missing. Darren learned from Quinn that Leroy Page was shot the previous night and was at a small local hospital. Darren got in touch with his uncle Clayton's friend Marcus who owned an antique store. Darren then got a call that he was granted a meeting with Bill King at the jail, during which he made a deal with the former ABT captain.

After a night of drinking bourbon, Darren pieced together the duplicitous sale of Hopetown by Rosemary King and Sanndler Gaines and realized that Levi King was being used a pawn. With Marcus's help, Darren ultimately found the boy alive on Gogo Island in Lake Caddo. The books end with Darren back at the Matthew's family home in Camilla.

More summaries and resources for teaching or studying Heaven, My Home.