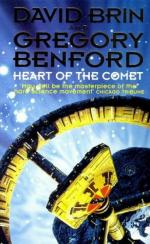 David Brin
This Study Guide consists of approximately 38 pages of chapter summaries, quotes, character analysis, themes, and more - everything you need to sharpen your knowledge of Heart of the Comet.

Heart of the Comet Summary & Study Guide includes comprehensive information and analysis to help you understand the book. This study guide contains the following sections:

This detailed literature summary also contains Topics for Discussion on Heart of the Comet by David Brin.

Heart of the Comet, by David Brin and Gregory Binford, is a science fiction novel about the colonization of Halley's Comet. Several decades in the future, exiles from Earth are offered the opportunity to travel to Halley's Comet in order to harvest the resources there to use on Earth. What begins for Carl, Saul, and Virginia as an opportunity to redeem themselves and return to Earth as heroes, quickly becomes the most harrowing challenge of all their lives.

The crew, which is composed of a number of opposing factions relating to the genetic modification of human beings, brings many of its prejudices with them into space, causing friction almost the instant that they arrive on the comet. Carl and Virginia are both Percells, genetically modified human beings, who do not share the natural distrust that other people of their species feel towards the Orthos or genetically orthodox humans. Nevertheless, the two Percells and one of their creators, Saul, must continually face abuse, distrust, and racism from both sides. To make matters worse, life has been lying dormant within the comet, and suddenly attacks the crew as they make there way to the outer edges of the Solar System. The mission is struck by countless diseases and creatures they have no idea how to combat, and for a long time, they face steady losses as the cometoid life-forms continue to attack humans and disrupt their colony on the comet. This tension worsens the already present distaste that Orthos and Percells already feel for one another, and the two groups steadily grow to dislike each other more and more, even as Virginia, a computer scientist, continually comes up with better ways to manage their robotic resources and Saul, a molecular biologist, develops cures and weapons against the cometoid life.

As time progresses, Saul discovers new ways to integrate the two different forms of life - Earth and cometoid - into a safe balance, but tensions from Earth have gotten so bad that few of the crew members hold out any hope. Tensions on the comet increase, their ship, the Edmund, is stolen in a mutiny, only to be destroyed by Earth because of the danger it poses in the form of contagion. The already divided crew takes to joining factions depending on their beliefs and where they believe the comet should ultimately wind up, for one of the mission's goals is to change its course to orbit around a planet. The problems worsen when a care package from Earth turns out to be a fusion bomb, sent with the intent of wiping out the comet and removing any threat of contamination from the comet's life-forms. After a devastating attack by the Ubers, who want to take the comet back to Earth and threaten the planet with warheads designed to seed the planet with cometoid life, the comets inhabitants overcome their divisions and unite, deciding not to remain inside the Solar System at all, but instead to travel to the nearby Oort cloud and begin civilization anew.

More summaries and resources for teaching or studying Heart of the Comet.

Heart of the Comet from BookRags. (c)2022 BookRags, Inc. All rights reserved.