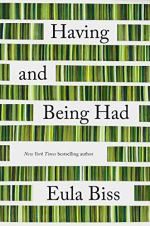 Having and Being Had Summary & Study Guide

Eula Biss
This Study Guide consists of approximately 30 pages of chapter summaries, quotes, character analysis, themes, and more - everything you need to sharpen your knowledge of Having and Being Had.

Having and Being Had Summary & Study Guide Description

Having and Being Had Summary & Study Guide includes comprehensive information and analysis to help you understand the book. This study guide contains the following sections:

This detailed literature summary also contains Topics for Discussion on Having and Being Had by Eula Biss.

The following version of this book was used to create this study guide: Biss, Eula. Having and Being Had. New York: Riverhead Books, 2020.

In this book, creative nonfiction writer Eula Biss explores concepts related to money and work. The book is structured as 88 brief essays, each of which is technically self-contained, but which often overlap in terms of theme and subject matter. Biss begins by considering the nature of consumerism and commercialism, which often seem to create extraneous needs rather than satisfy vital needs. Moreover, in the modern consumer culture, it often feels difficult to form meaningful, long-lasting connections with other people, including neighbors.

Biss also highlights connections between economic injustice and social injustice. For example, Biss notes historical and current dynamics by which Black Americans are systematically denied equal economic/property rights as white Americans. Moreover, economics is often very complicated in and of itself, and thus it can be difficult to fully understand how best to address problems of wealth disparity. Nonetheless, Biss does directly acknowledge wealth disparity as a major problem in the United States, with a majority of the country’s wealth being controlled by less than one percent of the population.

Additionally, Biss considers somewhat abstract ideas of capitalism, which nevertheless carry very urgent dynamics related to morality. For example, Biss considers the activity of investing in the stock market, which necessarily constitutes profiting from the labor of other people.

Relatedly, Biss interrogates the concept of ‘class,’ which is often defined not only by personal wealth, but also by social habits that a person adopts in order to project ‘membership’ to a certain class. Biss highlights the ways in which reinforcing class divisions ultimately harms most people and benefits only the very wealthy. Present-day class divisions also have parallels in older class structures. For example, the modern-day working class is in many ways representative of paid servants of past centuries, as well as representative of serfs under feudalism.

Biss also explores concepts related to work and labor, as she seeks to highlight complications and nuances within the very definition of work. For example, she notes that many forms of work are grueling and unrewarding, and that they are not beneficial to the worker in any way. However, Biss also notes that work can be quite fulfilling, especially if the work encourages interpersonal connection or is aligned with the worker’s interests. Relatedly, Biss explores the idea of art as work, and she considers the complicated and often paradoxical relationship between art and money.

More summaries and resources for teaching or studying Having and Being Had.

Having and Being Had from BookRags. (c)2022 BookRags, Inc. All rights reserved.