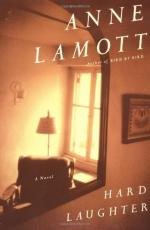 Clement is the town in which Jen's family lives. It has a population of two thousand people, most of whom are weird and crazy.

Jen lives rent-free in a cabin she inherited from her grandparents. She does not clean the cabin.

Wallace lives in a small house with Sarah and Randy.

There is one nasty little bar in Clement, with a jukebox that patrons sometimes break to protest the disco selections.

Wallace goes to stay in the hospital while he has his brain tumor removed. His family sneaks in food, since the hospital food is so bad.

Jen drives Wallace to the oncologist's office each day for two weeks for his radiation treatments.

Jen loves to go out to the ridge near her cabin which overlooks the ocean. Jen likes to watch sunsets...