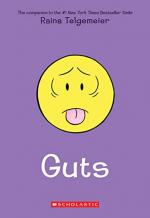 Raina Telgemeier
This Study Guide consists of approximately 66 pages of chapter summaries, quotes, character analysis, themes, and more - everything you need to sharpen your knowledge of Guts.

The following version of this book was used to create this study guide: Telgemeier, Raina. Guts. New York: Graphix, 2019. Guts is a graphic young adult memoir. There are no explicit chapter titles, but the author splits sections with an entire left side page filled with just an image and no words or page numbers - such as on pages 32, 70, 128, 140, 156, 166, 178, 184, and 194. For the purposes of this guide, the memoir is broken into six sections.

The book starts as Raina wakes in the middle of the night, and goes to the bathroom to throw up, with her mother there beside her. Raina is in fourth grade. At school, another kid throws in the yard at recess and all the kids stare, and when the kid comes back everyone calls him pencil puke. Raina and her friends talk about their food at lunch, Michelle making fun of Jane, while Raina explains her family’s particular and picky habits. That night she thinks she will throw up again, the images depicting her spiraling and falling in green, but she does not, but she still knows something is wrong. Her mother takes her to the doctor who says she is healthy, but this does not explain why she feels scared. Fourth grade ends as Raina thinks about how hard it is to get privacy, and the bathroom was the only place she could get it sometimes.

Soon Raina starts fifth grade, with her friends, and Michelle in her class, and a teacher she has had in another grade, Mr. Abrams. Mr. Abrams announces they will be doing LDIs or Lecture, Demonstration, or Instruction on topics the students want to pick. Raina and Jane work together and decide to present on Girl Scouts. During the presentation though, Raina freezes and runs to the bathroom. Jane tries to take her to the school nurse but Raina is too grossed out, and when she returns to class Michelle mocks her. Raina screams at her back. The next day when Raina comes home from school she sees her brother is sick on the couch, and panics and runs outside. She does not sleep all night and the next day is exhausted at school. Raina starts to miss too much school and her parents are concerned.

One day, Raina’s mother takes her to a therapist named Lauren. Lauren asks Raina to talk about why she is there, and at first it is hard, but Lauren is patient and tells her to try. It gets harder and harder for Raina to function at school though, and she spirals in and out of panicking about if someone near her can get her sick. She goes over to Jane’s house for a sleepover and eats kimchi. That night she has gas and the next day when her family goes to a buffet, they all notice how Raina is only eating lettuce and croutons, since she is afraid that everything will make her sick. Lauren urges her to remember there are lots of foods that do not make her sick, and maybe she can learn to control her own worry and reactions to everything. Eventually, she tries artichokes again and is excited and relieved when they do not make her sick. She learns that therapy is a process.

The girls in Raina’s school start clutching their midsections as well, as they start to go through puberty. Raina starts to wonder if she is going through puberty, and if this is why she has stomach aches and panic attacks. Her parents, on Lauren’s advice, decide to give her her own space, and split their bedroom in two. At the same time though, her grandmother moves in and the house still feels packed. Jane comes over one day and Raina shows Jane her comics and encourages Jane to draw telling her to try. Raina begins to love her separate space, using it for relief and to draw, but one day Jane tells her she is moving away. While they are sad thinking about, Michelle teases them asking if they are going through puberty.

Raina keeps going to therapy and working on trying to breathe and keep herself grounded, even in the face of fear over vomiting. One day at school she sees Jane and Michelle chatting and friendly. She immediately starts to worry and has stomach pain, going back to the doctor to be diagnosed as healthy, but with irritable bowel syndrome. When she goes back to school she gets a birthday party invitation to Jane’s birthday, and sees Michelle got one as well which makes Raina worry. Lauren helps her realize that everyone is scared of something, but it is a matter of controlling her fears. Raina says she can try. Raina gives her LDI in front of the class on the connection between mind and body, especially over fear and worry, and how to breathe through it.

One day towards the end of the school year they notice Michelle is gone from school; Mr. Abrams tells the class she is in surgery on her intestines and will not be returning for the end of the school year. At first Raina is ecstatic, but then decides to lead a class project to make a get well poster for Michelle. Soon it is Jane’s birthday party and the girls have pizza with artichokes and chat. Michelle is not there, as she is still in the hospital. They tell each other secrets and Raina confesses she goes to therapy, and the other girls hug her. They decide to call Michelle, and when it is Raina’s turn Michelle thanks her for teaching her the breathing technique in her LDI. The memoir ends as the girls settle down for bed, and Raina, smiling in the dark, releases a big green fart.