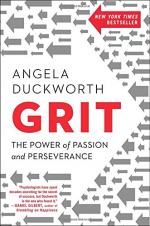 In Grit, Angela Duckworth, a psychology professor at the University of Pennsylvania, examines a quality that is related to consistently working hard towards a goal--a quality that combines passion and perseverance that she refers to as "grit." She examines why some people are able to succeed in impossibly hard situations, such as the grueling seven-week summer training called the Beast that West Point cadets are subjected to. Duckworth finds that traditional predictors of success, such as high grades or SAT scores or physical fitness are not highly predictive of which cadets will make it through the training. Instead, she finds that grit - or, the ability to persevere - predicts their success, as it predicts success in a number of other fields, including who makes it to the finals of the National Spelling Bee.

In the first part of the book, Duckworth defines grit as a combination of passion and perseverance and shows, using an equation, that effort is counted twice in calculating one's grit. She also discusses the pitfalls of believing that talent alone can help people achieve success, and she shows a version of the Grit Scale that she has developed to measure people's grit. The reader is able to use the scale to measure his or her own grit, and the author also shows how grit is related to having overarching, long-term goals that people develop over time.

In the second section of the book, Duckworth breaks down four components of gritty people, including interest, practice, purpose, and hope. She discusses each aspect in detail, and develops the idea of deliberate practice to cultivate grit. "Deliberate practice" (120) refers to the process in which people develop "stretch goals" (121) and work in a concentrated way to fine-tune parts of their performance. This practice requires people to be open to negative feedback. She shows that through the process of "job crafting," (166) people can make their jobs more purposeful, and she examines the importance of having a "growth mindset" (180) and being open to the idea that they can change.

In the third section of the book, Duckworth examines how people can develop grit from the inside out or the outside in. To develop grit, children, she feels, should immerse themselves in structured extracurricular activities in which they receive constant feedback. People can also develop grit by surrounding themselves with gritty teachers, parents, or leaders in a gritty culture. In the end, she leaves her readers with the idea that grittier people are happier people. In developing and practicing grit, people find a larger purpose that makes them more fulfilled and more connected to others at the same time.