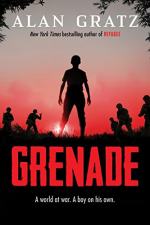 This detailed literature summary also contains Quotes and a Free Quiz on Grenade by Alan Gratz.

In Alan Gratz's novel Grenade, Hideki Kaneshiro is a 14-year-old boy, living an ordinary life in Okinawa until the Japanese force the Okinawan people to fight for their cause. As Americans land on the beaches of Okinawa, Hideki and about 100 other youngsters are pressed into service in the Iron and Blood Student Corps. They are warned again about the American devils who will kill anyone they encounter in the most brutal way Then, a commander with the Imperial Japanese Army hands each of them two grenades with instructions to kill as many Americans as possible with the first and to kill themselves with the second. Within hours, the boys face their first firefight. One of the boys is immediately killed by his own grenade, though Hideki is uncertain whether it was an accident or suicide. Another is killed when his grenade strikes a tree and bounces directly back to him. Hideki is one of the survivors, and he runs away. He finds the deceased principal of his school who is trying to save all the photos of the Emperor of Japan, knowing that a small piece of the Emperor's mabui – or spirit – is captured in each photo and must be protected. Hideki takes over that task and runs to the family's ancestral tomb, hoping he will find a safe place to rest.

Instead, Hideki finds his father, Oto, mortally wounded and offering information. He says that the Japanese have been lying about many things. Hideki's mother and young brother were sent to Japan to wait out the war, and Oto says their ship was destroyed with no survivors. Hideki believes he has always been plagued by the spirit of a cowardly ancestor, Shigetomo, but Oto has learned some facts about bravery. He urges Hideki to reevaluate his definition of bravery. Oto also says the Japanese are indifferent about the people of Okinawa, have no expectation of winning this fight, and are willing to sacrifice the land and its people. Oto advises Hideki to throw away the Emperor's photos and to find his sister. Then he dies. With his grief and this new knowledge, Hideki sets out to find his sister, Kimiko, who is working as a nurse.

Meanwhile, Private Ray Majors and his squad of Marines are engaged in horrifying fights. They have learned that the Japanese are willing to use the people of Okinawa as human shields and as weapons. After a particularly brutal battle, Ray is running for cover and finds himself unable to stop. He races around a tree and runs directly into Hideki, running from the other direction. Both are startled and still afraid from their previous encounters. Ray fires his weapon and Hideki fires his grenade. The shot misses Hideki but the grenade blast knocks them both out. Hideki wakes later to discover Ray is dead. He had seen Ray previously and remembers his name. He is surprised to see that he is very young and is carrying photos he has collected from dead Japanese.

Hideki wakes later to find an American doctor has tended a wound on his head. Hideki continues his search for his sister, Kimiko. He soon learns that the Americans are not dangerous as long as they are not afraid, and he discovers that the Japanese soldiers are just young men who were going about their lives until they were forced into this fight. He finds his sister and saves some youngsters in the process. After finding safety behind the American front lines, Hideki and Kimiko find a moment to talk. Kimiko reiterates what Oto said about bravery, and Hideki realizes that Shigetomo was not a coward and that his spirit is now at peace. Kimiko, who has the power to see spirits, realizes that Hideki has lost his own spirit and that he is carrying Ray's spirit with him. Hideki is ready to face the new challenges ahead, and he hopes that Okinawa will survive.