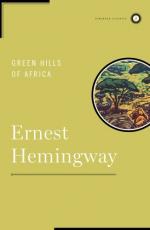 Ernest Hemingway
This Study Guide consists of approximately 33 pages of chapter summaries, quotes, character analysis, themes, and more - everything you need to sharpen your knowledge of Green Hills of Africa.

The so-called "dark continent" is a place of almost mystical appeal to Hemingway, in the beauty of its landscape and its wildlife, its relatively unspoiled nature, its simplicity and raw innocence.

The author and his party move from camp to camp several times, from territory to territory, in pursuit of their prey. The camps are never described in great detail, seeming to consist of a collection of tents set up around a fire. They are, it seems, the closest thing to home and refuge and safety that the author and his party have under the intense, searching circumstances of the hunt.

The kudu, a kind of African antelope, is one of several species of animals pursued by Hemingway, Karl and others of their party. Rare and not easily caught, it is in many ways the ultimate trophy, with its head (particularly if it...

More summaries and resources for teaching or studying Green Hills of Africa.