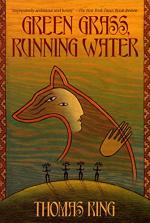 Thomas King
This Study Guide consists of approximately 60 pages of chapter summaries, quotes, character analysis, themes, and more - everything you need to sharpen your knowledge of Green Grass, Running Water.

The following version of this book was used to create the guide: King, Thomas. Green Grass, Running Water. Bantam Books, 1993.

In an unspecified location, a mysterious narrator tries to explain to a sleeping Coyote that in the beginning, there was just water. Coyote has a dog dream that comes alive and wakes Coyote from sleep. The dream is sentient and demands that it be called G O D, not Dog, and asks why there is water everywhere. The narrator “I” continues to tell the story to answer that question.

The story is told four times by the four different Native American elders named Lone Ranger, Ishmael, Robinson Crusoe, and Hawkeye, each of whom have escaped from a mental institution owned by Dr. Joseph Hovaugh. Each creation story involves a creation woman (First Woman, Changing Woman, Thought Woman, and Old Woman) who creates the world and runs into a figure from the western or Judeo-Christian tradition. Each story reveals how the four creation women earn the names that are associated with the four Indian elders.

Alongside these creation stories, the novel follows four plot lines. One plot line follows the escape of the four Indian elders and their mission to fix up the world. Dr. Joseph Hovaugh, who knows the four Indians have escaped before and caused natural disasters like Yellowstone, tracks them down with the help of Babo Jones, a janitor at the hospital and friend of the four Indians.

Another plot line follows Lionel Red Dog, Alberta Frank, and Charlie Looking Bear, who all grew up as members of the Blackfoot community in Blossom, Canada. Lionel works at Bill Bursums’s Home Entertainment Barn as a salesperson and is turning forty soon. He wants to change his life for the better and win the affections of Alberta, who has been casually seeing for some time. Charlie Looking Bear, Lionel’s cousin, is a hotshot lawyer for Duplessis, a construction company that wants to build and use the Grand Baleen Dam, despite its location on Indigenous land. Charlie also wants to be the center of Alberta’s attention and does not understand why she likes Lionel. Alberta is a university professor living in Calgary that wants a child but does not want a relationship. She dates both Charlie and Lionel in order to avoid committing to either man.

Eli Stands Alone is Lionel’s uncle and lives in his mother’s old cabin in Blossom. His cabin sits in the spillway of the dam, rendering it a legal complication for Duplessis to continue building the dam.

The characters each make their way to the Blackfoot annual Sun Dance ceremony at the local prairie. Coyote starts dancing, which causes an earthquake. Three stolen cars ram into the dam, which breaks it and destroys Eli’s house and life, but drains the lake and returns the water to its natural course.

Alberta finds out she is mysteriously pregnant, and Charlie decides to visit his father in Hollywood and make amends. Lionel continues to decide what path he will take his life. The community joins together to rebuild Eli’s cabin.

The novel ends the same way that it began. Coyote still does not understand where the water came from, and the narrator begins the story over again.