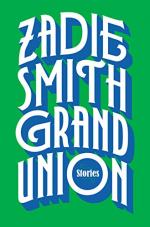 Zadie Smith
This Study Guide consists of approximately 55 pages of chapter summaries, quotes, character analysis, themes, and more - everything you need to sharpen your knowledge of Grand Union.

Grand Union is a collection of 19 short stories. It begins with “The Dialectic,” in which a woman vacations on the Baltic Sea with her children, contemplating her ongoing bitterness about the father of her children abandoning the family to emigrate to America. Next, in “Sentimental Education,” a woman named Monica reflects on her college years, remembering her relationship with a man named Darryl. Darryl's best friend Leon, a white drug dealer, lived in his dorm room despite not being enrolled at the school. Monica detested Leon, particularly as he represented a sort of lawlessness that she found abhorrent. She eventually told the Provost about Leon's presence and he was evicted from the premises. Darryl suffered an emotional breakdown in response and Monica broke up with him. She later saw Leon on campus again, setting up for a musical event, and attempted to have sex with him before realizing they were simply not well-suited to one another. Now a mother of three, Monica is amazed at how much her life and personality have changed.

In “The Lazy River,” a narrator vacationing in Spain imagines the hotel's Lazy River swimming pool as an extended metaphor for life. “Words and Music” features brief snapshots of the lives of people living in New York City, centered in particular on how they enjoy music or the sounds of city around them. In “Just Right,” a boy named Donovan Kendal living in New York's West Village is assigned a project by his teacher, who suggests Donovan incorporate the puppet show he performs publicly with his parents into his assignment. Embarrassed of the show, Donovan declines, but the girl he is partnered with for the project attends the show anyway and criticizes it. Feeling humiliated, Donovan is comforted by his mother, who assures him that the girl was not good enough for him.

“Parents' Morning Epiphany” consists of a narrator's analysis of a worksheet on narrative techniques given to her child at school. In “Downtown,” a narrator reflects on her love for her West Village neighborhood upon the closing (and then reopening) of her favorite restaurant. She reflects on contemporary political events in the U.S., as she is on the cusp of becoming an American citizen. In “Miss Adele Amidst the Corsets,” a middle-aged transgender woman visits a corset store, where she recalls painful events from her past and becomes convinced that the shopkeepers are quietly judging her, despite little evidence. She confronts the shopkeepers aggressively and is asked to leave the store. “Mood” features a series of snapshots about time and aging, also set in New York City.

In “Escape from New York,” pop singer Michael Jackson drives his friends Elizabeth Taylor and Marlon Brando out of the city on the morning of 9/11, reflecting on the ways in which the events of his unusual life have prepared him to deal with catastrophe. In “Big Week,” a 56-year-old man named Mike McRae is contending with the fallout of a series of personal and professional failings after becoming addicted to heroin, being fired from his job as a police officer, and getting divorced from his wife of 30 years. Despite these setbacks, he has an absurdly optimistic outlook on life, certain that things will turn around for him very soon.

In “Meet the President!,” which is set in the future, a 15-year-old boy named Bill Peek visits Felixstowe, England with his father, who is there on business. Bill is playing a game on his virtual reality headset when he encounters a woman and girl. The former is accompanying the latter to the funeral of her 12-year-old sister. Despite looking down upon the locals as provincial, when the woman abandons the girl, Bill agrees to take her to the funeral, where he realizes for the first time that death is an inevitability for people of all socioeconomic classes. In “Two Men Arrive in a Village,” two men responsible for a recent government coup show up in a village and wreak havoc, stealing, raping the women, and murdering a 14-year-old boy. “Kelso Deconstructed” is a fictionalized recounting of the 1959 murder of an Antiguan man named Kelso Cochrane. Cochrane was killed by white supremacists while walking home in Notting Hill and his funeral drew 1,000 mourners and turned into a protest against racially motivated violence.

“Blocked” is an imagined monologue by God, who admits that if he had to do things over again, he would make different choices when creating the world. “The Canker” is a fantasy story set on a colonized island, in which the locals are disdainful of the leader that rules them from the mainland. Their anger leads to increasingly unpleasant behavior, including children singing songs about dismembering the leader, and eventually widespread unrest. In “For the King,” a narrator recalls visiting Paris and meeting a friend for dinner, during which they discussed aging, sex, and relationships. Afterward, she wished she had told her friend about her train ride to Paris, in which she sat near a man with Tourette's Syndrome and his mother, as she was touched by the woman's kindness and sensitivity toward her son. “Now More Than Ever” is a parable about cancel culture on social media, in which people are shunned for the slightest mistake. The narrator eventually commits one such mistake, defending a poet that spoke up in favor of a very unpopular leader, and she is shunned or “canceled” (237) as a result. In “Grand Union,” a narrator imagines her deceased mother as Queen Nanny of the Maroons, a famous Jamaican revolutionary figure. She then imagines her grandfather standing atop a mountain, with his female descendants climbing down the mountain in a line.

More summaries and resources for teaching or studying Grand Union.