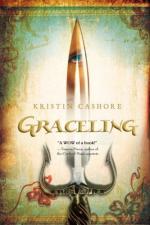 Kristin Cashore
This Study Guide consists of approximately 44 pages of chapter summaries, quotes, character analysis, themes, and more - everything you need to sharpen your knowledge of Graceling.

This detailed literature summary also contains Topics for Discussion and a Free Quiz on Graceling by Kristin Cashore.

The book opens with Katsa sneaking into a dungeon and preparing to overpower a group of guards. Katsa has overpowering force due to her Graced power and knocks out a series of guards, then gives them sleeping pills. Katsa arrives at the old Lienid man Tealiff in a jail cell and leaves as her secret Council accomplice Giddon begins to pick the lock on the Lienid man's cell. Katsa is about to leave the area when she meets a Graced Lienid fighter. She knocks him out, but decides to not kill him though he knows her identity. Outside of her secret Council organization, Katsa must obey the will of King Randa of the Middluns, and kills and maims people that King Randa dislikes. When Katsa returns to the Middluns court, she again meets the Lienid fighter. She ends up fighting him, and then decides to bring the Lienid fighter, Prince Po, to see his Grandfather Tealiff. Katsa becomes friends with Prince Po and becomes his fighting and sparring partner. After Katsa is able to openly defy King Randa, she agrees to go with Prince Po to find the true authors of the kidnapping of Tealiff. This is despite Katsa's resentment at finding out that Po is really a Graced mindreader.

Katsa journeys through the woods of Sunder on the trail of the kidnappers of Tealiff. Po has mindreading powers and finds out that merchants at an inn know that King Leck of Monsea has committed crimes, though they swear that Leck is innocent of crimes against Tealiff. Po decides that King Leck, who is one-eyed, must be secretly Graced with the power to make others believe his lying stories. Katsa and Po want to rescue Po's aunt Ashen and her daughter Bitterblue from King Leck. Katsa and Po find Leck as he kills Ashen, but are overwhelmed by his Graced power and forced to flee, though they are able to find Bitterblue. Po is able to confront Leck, but is wounded and has to hide in the woods in Monsea, while Katsa and Bitterblue flee Monsea through a dangerous and inaccessible route and mountain pass. Katsa and Bitterblue make their escape from Monsea and get to a ship at the port of Suncliff. After a fight, they convince the ship's captain that they are acting for Prince Po, and make for Po's castle. At Po's castle, Katsa is shocked to find King Leck has taken over, but is nearly overwhelmed by his Graced power. Only Katsa's love for Po enables her to kill Leck when he is about to blurt out that Po is a Graced mindreader. With Leck dead, his stories are exposed as lies and Katsa and Bitterblue return to Monsea with Bitterblue to become the new queen. They find Po in the woods alive, but Katsa discovers that Po is actually blind due to his wounds. Nevertheless, with his Graced mindreader and sensing powers, Po has the ability to convince others that he can see. Katsa and Po renew their relationship, though Katsa now has taken on the new mission to teach the girls and women of the seven kingdoms to defend themselves. The lovers promise to reunite in a few months at Po's castle.

More summaries and resources for teaching or studying Graceling.