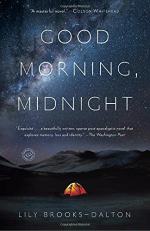 Lily Brooks-Dalton
This Study Guide consists of approximately 50 pages of chapter summaries, quotes, character analysis, themes, and more - everything you need to sharpen your knowledge of Good Morning, Midnight.

78-year-old scientist Augustine Lofthouse is living at a research facility in the Canadian Arctic Circle with a mysterious young girl named Iris one year after the other inhabitants of the facility were evacuated due to an unspecified global apocalyptic event. He has no idea where the girl came from and has been unable to make contact with the outside world. Augustine spends his time looking after Iris and contemplating his past regrets, particularly the fact that he has never been capable of making close connections with other people. He recalls a time many years in the past when he dated a woman at another research facility in New Mexico and she became pregnant. When she refused to have an abortion, he abandoned her. She sent him pictures of their daughter for a few years, but then they lost contact with one another.

Meanwhile, an astronaut named Sully (short for Sullivan, her last name) is aboard a spacecraft called Aether on a return trip to Earth after a mission to explore Jupiter. Sully and her crewmates lost contact with Mission Control several weeks earlier, and they are anxious about what this might mean, having no knowledge of the apocalyptic event. Like Augustine, Sully has regrets about her past, particularly her lack of a strong relationship with her own daughter, Lucy. While Sully trained to become an astronaut, her (now ex) husband Jack became Lucy's primary parent. Sully tries in vain to reach Earth on the spacecraft's communications system, and comforts her crewmate Devi who is feeling distraught that she may never see her family again. To pass the time, Sully plays cards with the mission's captain, Harper, and tells him about her mother, Jean. Jean was also a scientist and she taught Sully about astronomy when she was a child. When Sully was ten, Jean got married, and a short time later, had more children. Afterwards, Sully was never close to her mother again, and Jean died while Sully was in college. Sully never knew her father.

Augustine suffers from a bad fever, and when he awakens, he decides he and Iris should relocate to another facility at nearby Lake Hazen where the weather is more temperate and there is stronger radio equipment that might put them in touch with other survivors of the apocalyptic event. They take a snowmobile and arrive at the facility at the beginning of spring. Augustine and Iris enjoy their new home, going fishing and watching the wildlife. He continues to be preoccupied by thoughts of the woman he knew in New Mexico, a woman whose name is revealed to be Jean.

Aether loses an exterior satellite and Sully and Devi are chosen to conduct a spacewalk to attach a new one. Before they begin their mission, Devi tells Sully that she believes Harper is in love with her, and that she had a nightmare that she was drifting off into space. Sully and Devi commence the spacewalk and all is going well until Devi's spacesuit springs a carbon dioxide leak. Devi dies suddenly, and Sully must untether her body from the ship and watch her float off into space, just as her dream foretold. Sully finishes installing the new satellite and Aether's communications system becomes functional.

After Devi's death, Sully isolates herself more than ever and continues to be plagued by thoughts of her broken relationships on Earth. She is depressed and profoundly lonely. Harper tries to comfort her, but she keeps her distance from him. She continues to use Aether's radio to try to contact Earth. Suddenly, she hears a response.

Augustine has also been at the radio, and has heard Sully's transmission. The two are overjoyed to hear another person's voice, and they talk about their respective circumstances. Augustine feels as though he wants to tell Sully everything (though he is unaware that he is talking to his long-lost daughter), and Sully recognizes in Augustine the same loneliness she feels herself. After their talk, Augustine becomes ill again, sinking into fever dreams. He awakens and stumbles outside, believing he sees a polar bear. He walks toward the bear, with whom he feels a strong kinship, and lies down beside it. The polar bear holds him in its arms as he (presumably) dies.

Aether docks at the International Space Station and Sully, Harper, and another crewmate named Tal prepare to return to Earth in an escape pod. The night before they leave, Sully climbs into Harper's bunk and lies beside him. She knows that the people she loves on Earth may be gone, but she feels she could perhaps start a new life with Harper. The next day, as the astronauts set out in the escape pod, Sully holds onto Harper's arm, and he calls her by her first name – Iris.