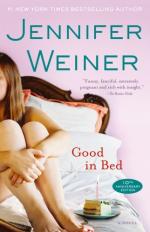 Related Topics
Mrs. Everything
Big Summer
That Summer: A Novel
The Summer Place

Jennifer Weiner
This Study Guide consists of approximately 40 pages of chapter summaries, quotes, character analysis, themes, and more - everything you need to sharpen your knowledge of Good in Bed.

It is early December. Cannie decides to write Bruce a letter to let him know that she is pregnant and keeping the baby. The letter says that she does not expect anything from him, but that telling him is the right thing to do. She indicates that he can be as involved with the child as he wants, or not. She sends the letter and waits for a response.

In the meantime, Cannie spends Christmas with her family and begins to tell more friends and relatives about the pregnancy. She keeps in touch over e-mail with Dr. K and with Maxi, both of whom offer to help in any way they can.

Cannie reads Bruce's December column, which is about public displays of affection. More time passes and she still doesn't hear from him. His February column features a full page photo of...

More summaries and resources for teaching or studying Good in Bed.