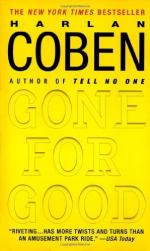 Harlan Coben
This Study Guide consists of approximately 38 pages of chapter summaries, quotes, character analysis, themes, and more - everything you need to sharpen your knowledge of Gone for Good.

Where the Kleins live and where Will grows up.

Where Ken and Will attend grade school.

Where Julie is murdered and where her parents live.

Where Will Klein works as a director and where he meets Nora Spring.

Where Will and Nora live.

Where Ken and Will go to camp as children and where they hold their reunion with Ken upon his return.

Where Nora is staying when Will finally finds her.

Where Will and Katy are apparently held by the Ghost.

Where Nora and Sheila met and where Ken is captured for return to the United States.

The name of the yoga institution founded by Squares, Will's best friend.

Where Morty Meyers lives and where he is when he...

More summaries and resources for teaching or studying Gone for Good.