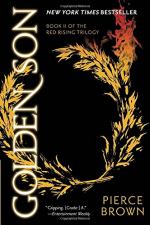 “Golden Son” is a dystopian science fiction novel by Pierce Brown, forming the second installment in his Red Rising Trilogy. “Golden Son” picks up two years after the events of “Red Rising”, in which the now 20-year-old Darrow trains at the Academy on Mars in the hopes of securing a fleet to command. On the surface, he has pledged loyalty to the House Augustus and Lord Nero, while secretly he labors for the Sons of Ares, a terrorist group designed to bring down the Society.

Darrow’s longstanding feud with Cassisus Bellona and the Bellona family is only made worse by the longstanding rivalry between the Augustans and the Bellonans. Cassius and several members of his family brutally beat up Darrow, causing Nero great embarrassment and political frustration. He determines that Darrow’s contract must be sold to another family to bring about order and stability once more. Darrow then comes into contact with Nero’s estranged son, Adrius, “The Jackal”. The Jackal aspires to return to his father’s good graces, and to gain political power once more. For the past two years, he has sown power among the lower-Colors and among the business classes. Darrow consents to helping him, knowing it will further his cause with the Sons of Ares to bring the Gold class down.

At a gala, the ruler of the Society, the Sovereign Octavia, plans to have the Augustus family slaughtered by the Bellonas to establish greater control over Mars. However, Darrow preempts this plan by declaring his desire for a duel with Cassius. Just as Darrow is about to win the duel, the Sovereign intervenes to save Cassius’s life, declaring her word is law. This leads to arguing and then fighting amongst the families, which in turn leads to bloodshed and civil war. Darrow declares the Sovereign to be corrupt. He knows that the Golds can deal with terrorism, and has come to believe terrorism itself is wrong. But he does know the Golds fear, and will not survive an open civil war.

Darrow and the Augustans flee, bringing to their side the most loyal of their allies – including the Telemanuses. A massive invasion of Bellona-controlled cities and territories on Mars is launched, in which all the classes fight alongside one another during the battles. It helps cause Darrow to realize that not all Golds are bad, and that the war must have freedom for all rather than just freedom for some as its end goal. As Darrow comes to learn when he is captured, the leader of the Sons of Ares is his old teacher, Fitchner, a Gold, and a member of the Sovereign’s inner circle. He and Darrow escape the Sovereign. Mars is taken successfully, and dozens more families and planets rally to the cause of Nero.

Nero, however, is uncomfortable with equality among the classes. He tells Darrow that he does not believe in God, but in humanity. Humanity must survive. The Society and its classes must survive to ensure that humanity survives. During a victory gala, elite Praetorians arrive to slaughter as many people as possible, including Nero. They have been betrayed by the Jackal. Among those already killed, Darrow learns, is Fitchner. Darrow himself is taken captive.