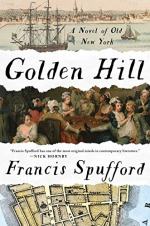 Francis Spufford
This Study Guide consists of approximately 32 pages of chapter summaries, quotes, character analysis, themes, and more - everything you need to sharpen your knowledge of Golden Hill.

This detailed literature summary also contains Quotes and a Free Quiz on Golden Hill: A Novel of Old New York by Francis Spufford.

The following version of this book was used to create this study guide: Spufford, Francis. Golden Hill: a Novel of Old New York. Scribner, 2017

The novel opens on November 1st, 1746. Englishman Richard Smith arrives in the small colonial town of New-York from London. He enters the office of a trading company owned by a man named Gregory Lovell and presents a bill from the shipping company with which Lovell does business. Smith says that he bought the bill so that he would not have to transport money across the Atlantic Ocean, and Lovell says that he will redeem the bill once the shipping companies’ other ships arrive with corroborating documents. The next day, a thief steals Smith’s wallet on the street, and Smith is only left with a little money to last him until the bill is verified and paid. In a coffee shop, Smith meets Septimus Oakeshott, who is an agent and secretary for New-York’s governor. He also meets Hendrick Van Loon, who is Gregory Lovell’s main business partner. That evening, Smith has dinner at the Lovell residence. During dinner, Smith refuses to answer any questions about his past or what he plans to do with his money when and if the bill is paid.

A few days later, Smith attends a public effigy-burning commemorating the anti-papist holiday of Pope Day. Smith is attacked by several drunken townspeople, and Septimus Oakeshott appears with a sword to defend Smith. Smith and Oakeshott run from the unruly mob and take refuge in Oakeshott’s home. The next morning, Smith accidentally witnesses Oakeshott engaging in sexual congress with a slave called Achilles, who is owned by the governor of New-York. Oakeshott and Achilles explain that they are in love, and Smith promises to buy Achilles’ freedom once the bill is paid. Later in the week, Smith attends a party at the Lovell’s residence commemorating the birthday of the King of England. One of the attendees is Gregory Lovell’s misanthropic daughter, Tabitha, with whom Smith has formed a distinct but unstable rapport. At the party, Oakeshott says that he is directing a play in town and wants Smith to act in it. Smith agrees and comments that Terpie Tomlinson, the outgoing wife of a local military officer, would be a good addition to the cast. Oakeshott then decides to replace Tabitha with Terpie in the play, and Tabitha becomes furious with Smith.

Tabitha avoids Smith for several days and then sends him a letter telling Smith to meet her at the docks. They take a day trip together, at the end of which they are greeted by a mob eager for Smith’s arrest. Tabitha explains with vindictive glee that one of the trading company ships arrived, and it had no corroborative paperwork for Smith’s bill. Smith is placed in debtor’s prison for all the unpaid debts he accumulated around town. The only other person in the prison is a man in the next cell who calls himself “the captain.” The captain gleefully tells a personal anecdote in which he testified against his friends in court in order to avoid punishment for his own secret complicity in the supposed crime, and then he volunteered to carry out the cruel, violent sentence handed down by the court. Another trading company ship eventually arrives with corroborating paperwork, and Smith is released from prison.

On December 5th, Smith attends a party at Hendrick Van Loon’s home celebrating St. Nicholas’ Eve. Mr. Lovell and Hendrick use the opportunity to finalize their business transaction with Smith regarding the bill. During the party, Smith takes note of Tabitha’s general social persecution at the hands of others. Later in the month, Oakeshott’s play has its performance, with Smith as one of the actors. Afterward, Terpie Tomlinson seduces Smith. Despite the fact that Terpie is married and Smith has nebulous romantic feelings for Tabitha, Smith engages in sexual congress with Terpie. Flora discovers them in bed together when delivering an apologetic letter from Tabitha to Smith. The townspeople agree that Smith must participate in a duel to answer for his cuckoldry against Terpie’s husband. Oakeshott volunteers to be Smith’s opponent, and during the duel, he covertly communicates to Smith that he will not hurt him. However, Smith accidentally cuts open Oakeshott’s femoral artery during the duel and Oakeshott bleeds to death.

Smith is placed on trial for Oakeshott’s death. His lawyer enlists the help of “the captain” in order to employ false testimony and posthumously attack the reputation and character of Oakeshott. Smith is convicted of manslaughter and is sentenced to have his thumb branded with a hot iron. With the money from the paid bill, Smith buys Achilles’ freedom, as well as the freedom of many other slaves. Before he leaves New-York, he tries to convince Tabitha to come with him but she refuses. The end of the novel reveals that Smith is actually a biracial man passing for white and that his mission in America is to buy and free as many slaves as possible.

More summaries and resources for teaching or studying Golden Hill: A Novel of Old New York.