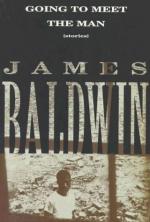 +Chapters Summary and Analysis
The Rockpile
The Outing
The Man Child
Previous Condition
Sonny's Blues
This Morning, This Evening, So Soon
Come Out the Wilderness
Going to Meet the Man
Free Quiz
Characters
Objects/Places
Themes
Style
Quotes
Topics for Discussion
Order our Going to Meet the Man Study Guide

Going to Meet the Man Quotes

James Baldwin
This Study Guide consists of approximately 30 pages of chapter summaries, quotes, character analysis, themes, and more - everything you need to sharpen your knowledge of Going to Meet the Man.

"And she found in his face not fury alone, which would not have surprised her; but hatred so deep so as to become insupportable in its lack of personality." The Rockpile, pg. 25.

"He affected not to have heard; he put his hands in his pants' pockets and pulled out some change and pretended to count it." The Outing, pg. 35.

"He shivered suddenly in the sharp, cold air and buried his face in David's shoulder. David looked down at him and tightened his hold." The Outing, pg. 43.

"He dropped on his face in the straw in the barn, his yellow head useless on his broken neck." The Man Child, pg. 80.

More summaries and resources for teaching or studying Going to Meet the Man.

Going to Meet the Man from BookRags. (c)2020 BookRags, Inc. All rights reserved.