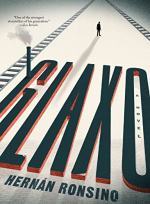 Hernan Ronsino
This Study Guide consists of approximately 39 pages of chapter summaries, quotes, character analysis, themes, and more - everything you need to sharpen your knowledge of Glaxo.

This detailed literature summary also contains Quotes and a Free Quiz on Glaxo by Hernan Ronsino.

The following version of this book was used to create this study guide: Ronsino, Hernan. Glaxo. Melville House, 2017.

Glaxo tells the story of four friends – Vicente Vardemann, Miguelito Barrios, Bicho Souza, and Lucio Montes – and how they became involved with a violent ex-police officer, Ramon Folcada, a man on the run from the law and hiding out in their hometown of Glaxo on the outskirts of Buenos Aires. By moving back and forth through time, the author keeps the specific nature of events secret until the final pages of the novel.

Part I takes place in 1973 and is told from the perspective of Vicente Vardemann, a barber who runs his family barbershop in Glaxo alongside his aging father. Vardemann observes workers blocking off the local train tracks and beginning construction work. Across the street, he sees an ambulance arrive to take a man named Miguelito Barrios to the hospital. A customer, named Lucio Montes, tells Vardemann that Miguelito’s condition is terminal.

Another customer, Miguelito’s stepfather Juan Moyano, tells Vardemann that Miguelito wishes to see him. Vardemann visits Miguelito on his deathbed and gives him a haircut. Miguelito is very distressed and tries to apologize to Vardemann but Vardemann tells him not to worry and that everything is in the past now. Vardemann returns to the barbershop and notices that the construction work is finished: they have replaced the old railway tracks with a new road.

Part II takes place in 1984 and is told from the perspective of Bicho Souza, a friend of Vardemann and Miguelito. After seeing a movie, Souza goes to a nearby restaurant where he remembers the way Vardemann and the now-deceased Miguelito used to impersonate movie stars from Westerns when they were younger. Souza unexpectedly meets his friend Lucio Montes in the restaurant. Montes tells him that he recently bumped into a woman named Miranda, who used to live in Glaxo with her husband Ramon Folcada.

Souza criticizes Montes for making Miranda talk about Glaxo and Folcada when the topics were clearly distressing for her. Miranda told Montes that Folcada told her something that he and Miguelito had done, after which she was too disgusted with them to ever see either of them again. After Montes finishes telling this story, Souza leaves the restaurant and telephones his son to wish him a happy birthday.

Part III takes place in 1966 and is told from the perspective of Miguelito Barrios. Miguelito is distressed by the unexpected return of Vardemann to Glaxo when Vardemann’s prison sentence finishes early. Miguelito recalls when he first became close with Ramon Folcada after his father died. Miguelito used to help Folcada take care of his horses. Miguelito remembered the time when Miranda and Folcada first arrived in Glaxo. Some American Mormons arrived in the town at around the same time, one of whom, Clifton Morris, was later found murdered in the cane fields.

After the death of his father, Miguelito got a job sorting packages at the train station. One day he was sent to Buenos Aires for work and happened to see Folcada’s wife Miranda on the train. Miranda offered to show him around the city and later that day they had sex. Miranda and Miguelito continued their affair when they returned to Glaxo but Miguelito was concerned that Folcada suspected them after he almost caught them together at a carnival. One day, Miranda disappeared after leaving an angry letter for Miguelito. Later, Folcada left town without warning as well. Vardemann’s unexpected return to Glaxo makes Miguelito imagine the possibility of his own death.

Part IV takes place in 1959 and is told from the perspective of Ramon Folcada. Folcada suspects that Miranda is cheating on him but he does not know who with. He ended up in Glaxo after something went wrong during his time in the police force, leading to Folcada and a number of his colleagues going into hiding. Folcada tries to work out who is sleeping with Miranda: he is certain it is not Miguelito or Bicho Souza, so narrows it down to either being Vardemann or Montes. He tells Miguelito that he will get him out of military service if Miguelito tells him who is sleeping with Miranda. Miguelito tells him that it is Vardemann.

Folcada lures the Mormon, Clifton Morris, into the cane fields where he accuses him of being a CIA spy before shooting him in the head. Folcada takes the gun and hides it in Vardemann’s barbershop. Folcada calls the police.

More summaries and resources for teaching or studying Glaxo.