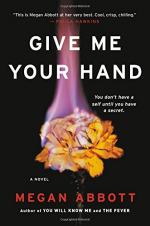 Related Topics
You Will Know Me
The Turnout

Give Me Your Hand Summary & Study Guide

Give Me Your Hand Summary & Study Guide Description

Give Me Your Hand Summary & Study Guide includes comprehensive information and analysis to help you understand the book. This study guide contains the following sections:

This detailed literature summary also contains Quotes and a Free Quiz on Give Me Your Hand by Megan Abbott.

The following version of the novel was used to create this study guide: Abbott, Megan. Give Me Your Hand. New York: Little, Brown and Company, 2018.

In Give Me Your Hand by Megan Abbott, two teenaged girls — Katherine “Kit” Owens and Diane Fleming — feed off each other’s ambition to earn a chance to study with the great female chemist, Dr. Severin. 12 years later, Kit and Diane are chosen to work with Severin on the research board for a study of Premenstrual Dysphoric Disorder. Kit is still haunted by a secret that Diane shared with her years before, while a secret that Kit shared with Diane impacted Diane’s life more than Kit could ever imagine.

Abbott describes how Kit and Diane met during a cross-country track camp. They encouraged each other to run their best. During an overnight trip, Kit confided to Diane how an adult, whom she knew as Stevie Shoes, was sexually inappropriate with her. Later, during their senior year, Diane transferred to the school that Kit attended. Diane motivated Kit to dedicate herself to studying just like she had motivated her during their cross-country days. Toward the end of their senior year, Kit ended the friendship when Diane admitted to her that she had murdered her father. Kit left her hometown of Lanister believing that she would never see Diane again.

12 years later, Kit was working for Severin Labs and anticipating that she would earn a spot on a PMDD research team, a spot she believed would make her career. When Severin announced that Diane had been hired to work at the lab, Kit believed that her chance to earn the spot on the PMDD research board was gone. Drunk and in a fit of jealousy, Kit told Alex, a co-worker and friend that Diane was a cold-blooded murderer. A few days later, Diane visited Kit at her apartment to tell her that they had both been chosen for spots on Severin’s PMDD team. Kit went to Alex as he worked in the lab on Saturday morning hoping to persuade him not to tell Severin about Diane being a murderer. As they argued, Alex put too much pressure on a flash column on which he was working, causing the test tube to explode. A piece of glass severed Alex’s jugular and he bled to death.

Diane had been eavesdropping on Kit’s argument with Alex and believes that Kit really did kill Alex. Diane does not call the police and will not allow Kit to report the accident because she believes that Kit will be charged with Alex’s murder. Both Kit and Diane are horrified when they arrive at the lab a few days later to discover that Alex’s body is gone from the lab and no one knows anything about his death. The only signs that anything is wrong are Eleanor’s, Alex’s fiancée’s, claims that Alex has disappeared.

Kit and Diane have the unfortunate luck of discovering Alex’s body hidden in the ceiling of the vivarium. They learn from Serge that he reported Alex’s death to Severin who ordered him to clean up the mess. Both Severin and Serge believed that Diane had killed Alex based on their previous knowledge of her. Serge was supposed to dispose of Alex’s body in the campus incinerator but he was unable to follow through with Severin’s orders. Serge has Kit and Diane wait with him in his office after they find the body. He serves them tea. Diane puts cyanide in Serge’s cup, killing him.

When Severin arrives she recognizes that Diane is responsible for Serge’s death. When Diane is interviewed by the police she admits that she killed her father and Serge. Diane also takes the blame for Alex’s death, believing that she is being a loyal friend to Kit. As police are leading Diane out of the lab, Kit sees a specimen knife in Diane’s hand but is not able to alert the police in time to keep Diane from killing herself.

Years later, Kit gets a letter from Diane’s mother telling her how Diane told her that she killed her father. Mrs. Fleming did not believe Diane and refused to go to the police station with her. Mrs. Fleming included in her note to Kit a picture of her current family. Kit sees that Mrs. Fleming is married to Stevie Shoes, the man who had the inappropriate relationship with Kit when she was just a young teen. It was because Diane had told her mother the truth about Stevie that Diane was sent to live with her father, a life change that seemed to acerbate Diane’s mental illness and led to her father’s murder.

Give Me Your Hand from BookRags. (c)2022 BookRags, Inc. All rights reserved.