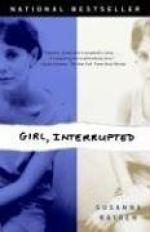 Susanna Kaysen
This Study Guide consists of approximately 30 pages of chapter summaries, quotes, character analysis, themes, and more - everything you need to sharpen your knowledge of Girl, Interrupted.

Susanna Kaysen offers a personal memoir about her diagnosis with Borderline Personality Disorder and subsequent confinement at McLean Hospital. After attempting suicide, Kaysen voluntarily commits herself and is assigned to a medium-security psychiatric ward. Over the next approximately eighteen months, she receives treatment consisting of drugs, therapy and analysis. During her period of confinement, she meets several other young women, who are also receiving various forms of treatment for disparate mental illnesses. Toward the end of her stay Kaysen receives a marriage proposal, which she accepts. The memoir concludes with a retrospective reevaluation of the time period and topics presented.

The presentation of events within the memoir is not chronological, although most events are placed in a more-or-less chronological order. References to future events are occasional while references to prior events are fairly frequent. Specific dates are often omitted and the narrative construction makes the ordering of events and the dates of some events difficult or impossible to ascertain with precision. The memoir presents several reproductions of documents, which offer the most authoritative event dating available. Given its brevity, the memoir covers a remarkable range of time and topics; most of the thirty-four chapters are about four pages long and, for the most part, fail to fully develop the theme or topic presented.

Kaysen grows up in a wealthy and prestigious family, which appears to be typical in most respects. Her mid-to-late teenage years are marked with developing mental illness, which is diagnosed as Borderline Personality Disorder. In 1965, at the age of seventeen Kaysen attempts suicide using a massive dose of aspirin. After this suicide attempt Kaysen engages in an illicit sexual relationship with her high school English teacher, while simultaneously terminating her relationship with her boyfriend. During this period she also engages in subdued, but routine, self-mutilation and experiences short-term catatonic fugues (i.e. short-term memory losses). In 1967, Kaysen voluntarily commits herself to McLean Hospital after hospitalization is recommended to her by a psychiatrist.

During the next eighteen months, Kaysen receives treatment with drugs, therapy, and eventually analysis. During her stay in the medium-security ward Kaysen meets and befriends several other young women who are also patients. The memoir contains some biographical information about several of these patients, as well as a few notes about a handful of healthcare providers at the hospital. In general, the information presented is too sketchy to develop a comprehensive understanding of the individuals discussed. Toward the end of her stay Kaysen unsuccessfully applies for several jobs before being hired as a typist. Her employment lasts less than a week. Kaysen then worries briefly about her future before receiving a marriage proposal, which she accepts. She is then discharged from the hospital and deemed to be fully functional by the staff.

The remainder of the memoir is dedicated to an examination of mental illness in broad terms, with a focus on Borderline Personality Disorder. Kaysen examines her own experiences with commitment and mental illness and argues—somewhat unconvincingly—that her mental illness was not serious enough to warrant confinement, given the socio-medical norms of the day.

More summaries and resources for teaching or studying Girl, Interrupted.