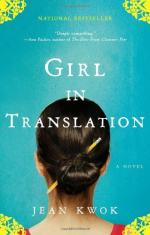 Kwok, Jean
This Study Guide consists of approximately 60 pages of chapter summaries, quotes, character analysis, themes, and more - everything you need to sharpen your knowledge of Girl in Translation.

This detailed literature summary also contains Quotes and a Free Quiz on Girl in Translation by Kwok, Jean.

The following version of this book was used to create this study guide: Kwok, Jean. Girl in Translation. New York: Riverhead Books, 2010.

In the prologue, an adult Kim Chang sees a little girl and her father in a dressmaker's shop. She remembers finding a picture of herself as a child, a school picture that she ripped up.

The novel then flashes back to Kim's childhood. 11-year-old Kim and her mother move to the United States after being urged to immigrate by Ma's sister Paula. Paula has secured their passage to the United States, as well as a job at the factory she runs with her husband and an apartment. Paula takes them to their dismal apartment, which is condemned and infested with roaches. Soon after, Ma learns that she must work at Paula’s factory from dawn until dusk; Kim must help her mother after school to meet her quotas. Meanwhile, Kim starts attending school with a nasty teacher who is unforgiving of her inability to speak English. There, she meets a kind friend, Annette, who gives her advice about living in the United States. At the factory, she meets another Chinese immigrant, Matt, who works there with his mother and his little brother.

Despite her limited English skills, Kim does well on her standardized testing. She does well enough that the school principal recommends her for prestigious private school, Harrison Prep. Her friend Annette will also be attending Harrison Prep. Kim is granted a full scholarship there. When she begins junior high at the school, Kim sees a discrepancy between her life and the lives of the other children, who are very wealthy. While she continues to have obligations at the factory, Kim excels at school, earning places in all the top math and science classes as she progresses through high school. As Kim succeeds, her aunt Paula–whose son Nelson does not do as well in school as Kimberly–becomes increasingly cruel towards her relatives. At the same time, Kim develops an increasing attraction to the kind Matt, who, despite his feelings for Kim, continues to date another girl, Vivian.

Eventually, Kim has many successes one after another. The Changs are finally able to pay off their debt to Paula. When Kim is accepted to Yale and Paula is unhappy for her niece, Kim and Ma finally cut all ties to their cruel relative. Soon after her acceptance, Matt comes to tell Kim that his mother has died. Kim is so overwhelmed with grief for Matt that she takes him home, and they have sex. Kim tries to use protection, but after Matt leaves, she sees the doubled condom they used ripped. Not long after, Kim learns that she is pregnant. She tells her two friends, Curt and Annette, and plans to have an abortion so she can attend Yale.

In the epilogue, Kim is a pediatric cardiac surgeon after her undergraduate studies at Yale and medical school at Harvard. She asks one of her patients if he can give her card to Matt. Eventually, Matt comes to see her at the hospital, and the pair discuss why they could not build a life together, despite their love for one another. After Matt leaves, Kim goes home to her son, Jason. Jason is also Matt’s son. Kim has never told Matt about him because she thinks then they would have no choice but to be together, something she thinks would make Matt unhappy. Kim knows that Matt will soon ask about his father, and she has not yet prepared what she will tell him.

More summaries and resources for teaching or studying Girl in Translation.