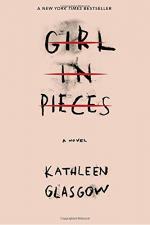 Kathleen Glasgow
This Study Guide consists of approximately 74 pages of chapter summaries, quotes, character analysis, themes, and more - everything you need to sharpen your knowledge of Girl in Pieces.

This detailed literature summary also contains Quotes and a Free Quiz on Girl in Pieces by Kathleen Glasgow.

The following version of the novel was used to create this study guide: Glasgow, Karen. Girl in Pieces. Delacorte Press, August 30, 2016.

In Girl in Pieces by Kathleen Glasgow, Charlotte “Charlie” Davis’ life has left her in pieces. Not even 18 years old yet, Charlie has experienced the worst of what life has to offer. In the hands of a man who sells underage girls as prostitutes, Charlie tries to kill herself by cutting her arms, legs, and stomach with glass from a broken mason jar. She has used cutting in the past in an attempt to deal with the stress of life. Friends drop her off outside an emergency room where Charlie is treated and then admitted to a psychiatric hospital. She is only beginning to heal both physically and emotionally when she is dismissed from the hospital because she has no insurance to cover her stay. This novel tells the story of Charlie’s attempt to put the pieces of herself back together and create a positive life for herself despite her past.

Charlie’s father, who showed signs of mental illness, committed suicide when Charlie was young. Her mother withdrew in her grief and took her anger out on Charlie. Charlie was bullied at school because she was poor and because she had scars on her arms from cutting. She thought her life was changing when she met a girl, Eleanor “Ellis” Vanderhaar, who accepted Charlie as she was. When Charlie got tired of her mother hitting her and hit her back, Charlie’s mother threw her out of the house. Charlie lived with Ellis until Ellis’ parents found drugs. The drugs belonged to Ellis’ boyfriend, but she blamed them on Charlie. Charlie was left to live on the street. After Ellis’ boyfriend broke up with her, she tried cutting to deal with the pain but did something wrong and lost a good deal of blood. She texted Charlie, telling her that cutting hurt more than Charlie said it would. Charlie ignored her texts. When she learned the next morning that Ellis had suffered a brain injury from blood loss, Charlie blamed herself.

On the streets, Charlie met up with boys Evan and Dump who rescued her from a man who was trying to rape her. She stayed with them several months until they took her with them to a sex house owned by a man Charlie referred to as Fucking Frank. Frank provided Evan and Dump with drugs but he told Charlie that she would have to work as a prostitute in order to earn her room and board. Charlie refused, winding up in the attic of Frank’s house where she attempted to kill herself.

In the psychiatric hospital, Charlie slowly opened up about what happened to her. She only began talking after the doctors removed the bandages and stitches from her wounds. It was easier for her to put her emotions on paper in the form of sketches than it was to talk about them. Charlie grew to like Louisa, her roommate, who cut and burned herself. Louisa wrote out her story in composition notebooks. She told Charlie that one day, she wanted to tell Charlie her story because she thought that Charlie would understand.

Because Charlie had no medical insurance to pay for the expensive inpatient therapy, the hospital dismissed Charlie before she was capable of dealing with life again because she was no longer a threat to herself. Because there was no bed available in a halfway house, arrangements were made for Charlie to stay with her mother. Charlie reached out to Mikey, a friend she had met through Ellis, asking him to save her.

Charlie’s mother arrived to take Charlie home when the hospital dismissed her. Once they were some distance away from the hospital, Charlie’s mother gave her an envelope containing Charlie’s birth certificate and other identifying papers along with a bus ticket to Tucson. She said that Mikey had arranged for Charlie to stay at his apartment. He would take care of her. Charlie was devastated by her mother’s suggestion that they would not be able to live together. However, she was excited because she had a crush on Mikey ever since Ellis had introduced him to her. Charlie thought Mikey intended for them to have a life together.

When she first arrived in Tucson, the people and the noise overwhelmed Charlie. She spent her time hiding in Mikey’s apartment until his landlady, Ariel Levertoff, confronted Charlie, telling her she needed to get a job and her own apartment in two weeks. Charlie got a job washing dishes and found a room for rent on the poor side of town that she could barely afford. She felt proud of her accomplishments.

Soon, Charlie became friends with Riley West, a musician whose sister, Julie, owned the café where Charlie worked. Riley was a cook who could provide Charlie with free food. Because he had problems with drugs and alcohol, Charlie felt that perhaps he was the only person who could really understand her background. When Charlie learned that Mikey had a girlfriend, she began to depend on Riley even more heavily for the emotional support she desperately wanted. When Charlie learns that Mikey has gotten married, she attempts to dedicate herself to Riley even though she knows that Riley does not treat her as a man should treat a girlfriend.

On the day that Charlie’s art is to be on display in an art show, Charlie has a fight with Riley. Then, when she returns home, she discovers that Blue is not there. She goes looking for Blue and finds her at Riley’s house, doing drugs. Blue tells Charlie that Louisa set herself on fire. Charlie looks for Riley, hoping for comfort. Instead, she discovers Riley and Wendy, his drug dealer, having sex. Overwhelmed by all that has happened that day, Charlie goes back to her apartment and cuts herself.

Tanner and Linus take Charlie to their grandfather’s house in Santa Fe for her to heal both physically and emotionally. It is while she is in Santa Fe that Charlie begins to connect with her own emotions and sketches her own story. Charlie returns to Tucson and attends the benefit concert where Riley sings. She realizes that the song he sings is his way of saying that he is sorry for the way he hurt Charlie. Later, Felix contacts Charlie and offers her a job. She accepts.

More summaries and resources for teaching or studying Girl in Pieces.