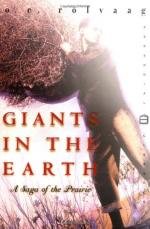 Compare & Contrast Giants in the Earth by Ole Edvart Rølvaag

Ole Edvart Rølvaag
This Study Guide consists of approximately 81 pages of chapter summaries, quotes, character analysis, themes, and more - everything you need to sharpen your knowledge of Giants in the Earth.

1870s: Prior to the 1880s, the majority of immigrants to the United States came from the British Isles and northwestern Europe.

1927: A quota law passed in 1924, fixing the number of immigrants from each nation of origin, favored Europeans and effectively barred most Asians.

Today: Since 1965 national quotas have been replaced with hemispheric limitations, and provisions exist for acceptance of political refugees. The United States grapples with the Issue of illegal immigration, particularly from Latin America, and its social, economic, and political effects.

1870s: The Indian Removal Act of 1830 and western migration of whites following the discovery of gold in California in 1848 signaled the beginning of a grisly struggle for territory between the European Immigrants and Native Americans.

1927: By 1887 most Native Americans had been forced onto reservations, where life was marked by poverty, poor education, and unemployment that would persist throughout the century.

More summaries and resources for teaching or studying Giants in the Earth.

Giants in the Earth from Gale. ©2005-2006 Thomson Gale, a part of the Thomson Corporation. All rights reserved.