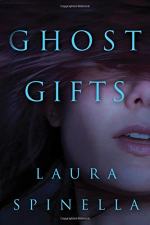 Laura Spinella
This Study Guide consists of approximately 64 pages of chapter summaries, quotes, character analysis, themes, and more - everything you need to sharpen your knowledge of Ghost Gifts.

Aubrey Ellis has the ability to communicate with the dead. When Aubrey was young, the dead had the upper hand of communicating with her. Aubrey was unable to control the connections or the communications, and she spent a lot of time reeling from the interactions. Her grandmother, Charley, helped Aubrey begin to take control of her life. Charley had deep understanding of the situation because Aubrey's gift is a family legacy. Aubrey moved in with Charley as a very young child while her father struggled to cope with his own psychic abilities. Her parents died in what might have been a tragic accident or might have been her mother's only way of dealing with the situation.

Charley owned a carnival that provided a living and lifestyle. Aubrey considered the other members of the carnival as her family. The connections with her carnival family provided a support system that was vital to young Aubrey. During a stop in Surrey when Aubrey was a teenager, a handsome young man won a stuffed animal at the booth Aubrey was working. Immediately behind him, a beautiful young girl handed Aubrey a small bouquet of violets. The dead had often given Aubrey gifts, but it would take her more than 20 years to figure out this message.

Twenty years later, Aubrey is a reporter for a community newspaper. She is happy with her life and her lifestyle, having settled into a permanent home with Charley. Aubrey's estranged husband, Owen, has moved out. Their divorce is almost final when Owen announces that he wants them to give their marriage another chance. Aubrey is excited at the opportunity until it becomes clear that Owen wants the second chance only on his terms, and that Aubrey controlling her psychic ability is one of those terms.

Meanwhile, Aubrey's professional world is rocked when a homicide case is resurrected. Missy Flannigan has been missing more than 20 years. Frank Delacourt has spent those years in jail. He was convicted based on blood and hair found in his room. Missy's body is discovered in Dustin Byrd's basement. Everyone immediately jumps to the conclusion that Dustin was the murderer, and Frank is set free.

When the staff of the Surrey City Press gather for their first meeting to plan coverage of the news story, Levi St John breezes in, assigned by the corporate owners of the newspaper. Levi is strong,capable, and entirely focused on facts. When the editor assigns Aubrey to help Levi navigate the town and its residents, Aubry tries to refuse. Levi does not want her help, and Aubrey is afraid that she will be opening herself to the vindictive anger of Missy's ghost. Forced to take on the assignment or reveal why she is reluctant, Aubrey relents. She soon realizes there is more to Levi than she expected, and that Levi's dead brother has been working behind the scenes for the chance to communicate with Levi. Skeptical at first, Levi becomes a believer in Aubrey's ability. Unlike Owen, he accepts this as a part of Aubrey, and the two are soon romantically involved.

Aubrey eventually realizes that Missy had appeared at the carnival duck booth just hours after her death. The flowers she left at the booth – violets – eventually lead Aubrey to realize that Missy was identifying her killer as Dustin's mother, Violet Byrd. In the final confrontation with Violet, the killer reveals that she had caught Missy with money from Dustin's safe. Violet also shoots Levi, but he survives. Missy insists that Aubrey could do more for her memory, and Aubrey's first book – a look at Missy's complex life – is released by the time Aubrey and Levi's son is a toddler.

More summaries and resources for teaching or studying Ghost Gifts.