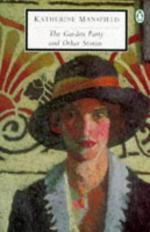 Katherine Mansfield
This Study Guide consists of approximately 46 pages of chapter summaries, quotes, character analysis, themes, and more - everything you need to sharpen your knowledge of The Garden Party.

1920s: With the advent of the modernist movement, writers, artists, and musicians struggled to express the alienation they felt toward Western culture.

1990s: Cultural commentators are still drawing inspiration from the disconnection they perceive with their values and popular culture. A term "Generation X" has been coined to describe a whole generation of people that is thought to feel alienated from the rest of society.

1920s: Stalin establishes himself as dictator of the Soviet Union and proceeds to purge his people of dissent.

1990s: The Soviet Union has deteriorated into a debt-ridden Russian Republic. Democratic institutions are weak but existent.

1920s: Harold Ware demonstrates mechanized farming to the Soviets. He also takes volunteers and $150,000 of equipment and seed to a 15,000 acre demonstration farm near Moscow.

1990s: America helps Russia avert a food shortage by loaning it money to buy American grain. The grain, which...

More summaries and resources for teaching or studying The Garden Party.

The Garden Party from Gale. ©2005-2006 Thomson Gale, a part of the Thomson Corporation. All rights reserved.