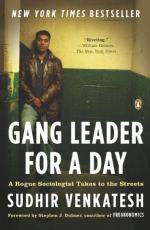 Summary
+Chapters Summary and Analysis
ONE – How Does It Feel to Be Black and Poor?
TWO – First Days on Federal Street
THREE – Someone to Watch Over Me
FOUR – Gang Leader for a Day
FIVE – Ms. Bailey’s Neighborhood
SIX – The Hustler and the Hustled
SEVEN – Black and Blue
EIGHT – The Stay-Together Gang
Important People
Objects/Places
Themes
Styles
Quotes
Topics for Discussion
Order our Gang Leader For a Day Study Guide

Sudhir Venkatesh
This Study Guide consists of approximately 50 pages of chapter summaries, quotes, character analysis, themes, and more - everything you need to sharpen your knowledge of Gang Leader For a Day.

Gang Leader For a Day Summary & Study Guide includes comprehensive information and analysis to help you understand the book. This study guide contains the following sections:

This detailed literature summary also contains Topics for Discussion on Gang Leader For a Day by Sudhir Venkatesh.

Sudhir Venkatesh was of East Indian heritage and lived and was educated in an upper-middle class neighborhood in southern California. After finishing college, he landed at the University of Chicago in 1989 where he had been accepted as a graduate student in sociology. He worked under William Julian Wilson who was one of the top sociology professors and the foremost African American in the field. There were long-accepted standards and methodology that was utilized in researching sociological issues for graduate dissertations. Sudhir was an idealist and a bit naïve compelling him to discard the conventional ways in which scholarly research was conducted. Sudhir chose race and poverty as the main topics of his dissertation. And he had a great idea how to find out what really goes on in the impoverished neighborhoods of Chicago’s South Side. Sudhir decided to infiltrate himself into the projects so that he could study first-hand the operation and anatomy of drug-dealing gangs.

Needless to say, Sudhir did not share fully his plans with Professor Wilson and the other professors and researchers in the Sociology Department because he knew they would not endorse this unconventional approach. Sudhir was a very bright young man and was savvy enough to know that what he was about to embark upon would be wrought with danger and that he literally might not escape with his life. On his very first day in a project, he was mistaken as a spy for a rival Hispanic gang because he was thought to be Mexican.

Sudhir didn’t hightail it out of the projects. For one thing, they wouldn’t let him go and for another, he didn’t want to go. Even though he’d been beaten and threatened with worse, he was determined to learn from the viewpoint of the poor black gang member what life was like. When J.T. the gang leader of the project that Sudhir had chosen for his venture met him there was an immediate familiarity between the two men from very different worlds. Sudhir explained his purpose for coming to the project. He was gathering data for his university project and that he someday wanted his work to make life better for the poor black in Chicago. J.T. ordered his men that it was hands off with Sudhir and that he’d be back the next night.

Sudhir spent a total of six years in his close relationship with J.T. and the people of the Robert Taylor Housing project. Although Sudhir was exposed to a wealth of inside information, there were secret parts of the gang’s activity that J.T. would not let him in on. His professors ultimately learned the risk that Sudhir had been taken and advised him to stop visiting the project – it was dangerous and he could be complicit in crimes that he witnessed but failed to report. But Sudhir was hooked. He cared about the men and women of the projects. He developed deep feelings for them and his hope that his work would one day help them never dissipated.

More summaries and resources for teaching or studying Gang Leader For a Day.

Gang Leader For a Day from BookRags. (c)2022 BookRags, Inc. All rights reserved.