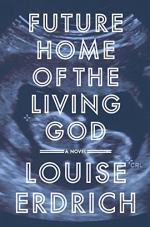 Related Topics
Bidwell Ghost
Fleur
Love Medicine
Saint Marie
Tales of Burning Love
The Antelope Wife
The Beet Queen
The Bingo Palace
The Birchbark House
The Red Convertible
Tracks
The Round House
Round House, the: A Novel
The Plague of Doves
LaRose
The Night Watchman
The Leap
Four Souls
The Sentence
The Last Report on the Miracles at Little No Horse
The Master Butchers Singing Club
Shadow Tag
Antelope Woman
The Painted Drum

Louise Erdrich
This Study Guide consists of approximately 50 pages of chapter summaries, quotes, character analysis, themes, and more - everything you need to sharpen your knowledge of Future Home of the Living God.

This detailed literature summary also contains Quotes and a Free Quiz on Future Home of the Living God by Louise Erdrich.

The following version of this book was used to create this study guide: Erdrich, Louise. Future Home of the Living God. New York: HarperCollins, 2017.

The protagonist of Future Home of the Living God is Cedar Hawk Songmaker, a 26-year-old pregnant woman from Minneapolis who is narrating the story as a journal she plans to give to her unborn child. She explains that an apocalypse is underway involving the reversal of evolution, and that authorities believe this situation could lead to difficulties in human reproduction. Cedar, who is a Native American adopted at birth by Glen and Sera Songmaker, two liberal Buddhist hippies, chooses this time to visit the nearby Ojibwe reservation and meet her birth mother.

On the reservation, Cedar is pleased to discover that Mary “Sweetie” Potts, her birth mother, shares her Catholic faith. Cedar witnesses Sweetie convince the tribal council to erect a shrine honoring Kateri Tekakwitha, the Native American Catholic saint. Cedar also meets her teenage delinquent half-sister, Little Mary Potts, and Sweetie's boyfriend Eddy, a depressive Ivy League graduate who is writing a book as a way to distract himself from his suicidal thoughts. She is slightly less impressed with the fact that the Potts own a gas station called the Superpumper, as she always imagined them living more exciting and meaningful lives. After this visit, Cedar goes to her first ultrasound appointment. She overhears the doctor administering the test say, “We've got one” (50), and then when the nurses leave the room, he tells her to tape him to the chair and run, and to tell no one that she is pregnant.

Cedar returns home and plans to remain there for the foreseeable future. She is aided in this by Phil, her boyfriend and the father of her child. He comes and goes from Cedar's house to the church where they met, and where he has found a cache of supplies. One day, while working at her computer, Cedar is alarmed to see a face appear on the screen, a woman who says, “Hello...I am Mother. How are you today” (68). Phil warns her that pregnant women are being rounded up and detained in birthing facilities by a shadowy religious organization called the Unborn Protection Society (UPS). Pregnant women are expected to turn themselves in, and anyone caught helping a pregnant woman avoid the reaches of the UPS is in violation of the law. Cedar tries to get in touch with the Songmakers, but they have fled their home. Finally, Eddy and Sweetie turn up at Cedar's house one night and say that they have helped the Songmakers escape to Canada, and that they are prepared to help Phil and Cedar do the same. Phil suggests they wait a few days to collect supplies. Mother appears on Cedar's computer screen again, and Phil attempts to smash the computer.

As Part II begins, it is clear that things did not go as planned, as Cedar is writing from the confines of a hospital, one of the UPS's detainment facilities. Her roommate is a woman named Tia Jackson. Cedar and Tia pull apart their blankets and then weave them together into a rope. Sera infiltrates the hospital, posing as an employee, and creates a diversion so they can climb out the window, however they are momentarily caught, and have to murder a nurse on their way out. Cedar learns that Phil turned her in to the UPS.

Sera takes Tia and Cedar to a recycling facility to hide out. Tia goes into labor and loses her baby, a sign that the warnings about reproductive difficulties may be true. Sera and Cedar reunite Tia with her husband, and then make their way to the safety of the Ojibwe reservation. They begin quarreling regularly, because Sera is anxious about Cedar's pregnancy and consequently unable to express joy. During one of these arguments, it comes out that Glen is in fact Cedar's real father, the result of an affair with Sweetie. Cedar is upset that she did not know he was her real father all of her life, but realizes that he lied to protect Sera, so she would not feel like an outsider in the family. The reservation is infiltrated by Mother/the UPS, and Cedar is rescued by Phil, who shows her his scars from enduring torture by the UPS before giving up her location.

Cedar goes to the Kateri Tekakwitha shrine on the reservation to pray, and she is abducted by a couple seeking a monetary reward from the UPS. She is taken to Stillwater Birthing Center, a detainment facility located in a former prison. She discovers that women are being arrested and held here and impregnated against their will. In the dining area, she sees a wall featuring photographs of the numerous women who have died there while giving birth. She is treated by a doctor she recognizes from her time in the UPS hospital, and begs the woman to look after her child after it is born. Cedar goes into labor and successfully delivers the baby, but her heart is damaged in the process. Her newborn son is taken away from her, and she is informed that she will remain in the facility and forcibly impregnated. At the end of the novel, Cedar reflects on the last time she remembers seeing snow when she was eight years old, and she wonders if and when her child will ever see it.

More summaries and resources for teaching or studying Future Home of the Living God.