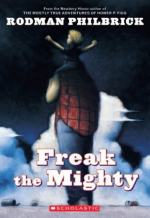 This detailed literature summary also contains Topics for Discussion and a Free Quiz on Freak the Mighty by Rodman Philbrick.

The story of "Freak the Mighty" begins with Max looking back on his friendship with Kevin, or as Max affectionately refers to him as, Freak. Max first encounters Freak when they are both in pre-school. He recalls Freak bursting into the nursery school like he owns the place. His head is normal sized but his body is small and twisted beneath him. Freak has shiny silver braces on his legs and proclaims loudly to everyone that he is a robot. Max has his own problems, he is unusually large and a little on the rough side, in fact, there are those, including his loving grandparents, who think he is downright violent—or fears he will be someday. Freak does not last long at the pre-school and Max does not see him again until the third grade when he just catches a glimpse of him on the short bus.

The summer before eighth grade, to Max's surprise, Freak and his mom, the beautiful Gwen, move just a few doors away from him. Max is too shy to talk to Freak but he watches him from behind some bushes. Freak spots Max and tells the "earthling" to show himself, which is the beginning of their unusual friendship. Max has never known anyone as smart as Freak—he can speak on any subject. His vocabulary is also impressive. Max has to ask him continually what he is talking about or stay silent and pretend he knows. Freak is equally impressed with Max—he is so big and strong. Nobody messes with this guy.

At a 4th of July fireworks celebration, Freak cannot see the display due of his small stature. Max, without asking, lifts Freak's light body up on his wide strong shoulders. Freak is not offended—on the contrary he is delighted. He sees the show and for the first time in his life feels taller than everyone. On that night, "Freak the Mighty" is born. For the next year, it is not an unusual sight to see Max walking along with Kevin perched on his shoulders. They complete each other. Max is happy to finally have a brain on his soldiers and Freak is in heaven traversing the terrain on the longest legs he ever dreamed of.

The two boys become best friends who go on quests and adventures dreamed up by the brain—Kevin. The Freak fantasizes about being one of the Knights of the Round Table. In fact, he closely identifies with King Arthur, who as a young, weak boy is the only one in Camelot who can pull the magical sword Excalibur out of its stone. Kevin is determined to slay all the dragons and monsters out there. Perched atop of Max, he guides his steed—Max that is—to quest after quest. Unfortunately, one dragon they cannot slay is the one that is taking place inside Max's body. His organs are growing faster than his crippled body.

The two boys are able to defeat a very bad monster; when together they are able to elude Max's father, Killer Ken, who has kidnapped Max and is ready to kill him. The memories rush back to Max of when he is four years old and witnesses his father killing his mother. After Freak uses his water gun to shoot a stinging liquid into Ken's eyes, his rampage is soon over and he is back in police custody.

Freak does not make it past the first year mark of their friendship and the one year anniversary of "Freak the Mighty." Before he leaves, he insists that Max write the story of their adventures and quests. Max does not think he can do it, but is compelled to do so by the memory of his young friend who believed in him.