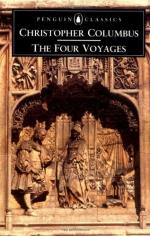 This detailed literature summary also contains Topics for Discussion on Four Voyages to the New World; Letters and Selected Documents by Christopher Columbus.

Four Voyages to the New World; Letters and Selected Documents by Christopher Columbus is the account of Christopher Columbus's four journeys to North America between 1492 and 1504. The voyages are presented through a variety of primary sources: these include Columbus's own log-book of his travels and letters to the sovereigns of Spain, as well as to various other correspondents; excerpts from Columbus's son's biography of his father, which includes detailed descriptions of the journeys (some of which the son, Hernando Colon, went on as well); and accounts from various other sources, including a doctor who accompanied Columbus on his voyages and a sailor who served under Columbus's ("The Admiral") command. The book includes an introduction from the editor and translator, J.M. Cohen, who supports and refutes various claims made throughout the book; in addition, maps of each voyage and the overall journeys are included in each section.

Columbus, who thought he was discovering the east Indies, famously set off for his first voyage to North America or the New World in 1492. During this trip, he visited many settlements and villages in what are now Jamaica, Hispaniola, and Cuba. This trip took several months; in his log-book, Columbus describes the voyage across the Atlantic and the physical characteristics of the new territories and their inhabitants in great detail. The second trip, which included stops along the Leeward Islands as well as travel around Puerto Rico and a return to Hispaniola, also went well, though Columbus was dismayed not to find as much gold as he had hoped for, in addition to which most of the men he had left there during his first voyage had been killed. During Columbus's third voyage, his men had become greatly disheartened and mutinied against him, leaving him with only a few followers. Hearing of this, King Ferdinand and Queen Isabel in Spain sent an independent judge to see if Columbus was really an unjust leader; however, this judge took control of Columbus's property without making any inquiries and sent the explorer back to Castile in chains. Finally, however, Columbus was vindicated and returned for one last trip; on his return journey to Spain, the queen died, and he arrived only to die shortly thereafter himself.

Throughout the accounts, Columbus tells of how his conception of the world changed. For example, while he originally accepted the fact that the earth was round, his navigation convinced him that it was, in fact, pear-shaped and smaller than he had initially thought.