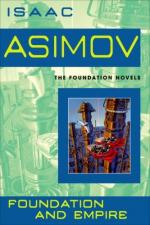 Isaac Asimov
This Study Guide consists of approximately 41 pages of chapter summaries, quotes, character analysis, themes, and more - everything you need to sharpen your knowledge of Foundation and Empire.

This detailed literature summary also contains Topics for Discussion and a Free Quiz on Foundation and Empire by Isaac Asimov.

It was Hari Seldon who foresaw the current conditions of the Galaxy, including the fall of the Empire. Seldon, in an effort to lessen the time of barbarism that is bound to follow the fall, created two Foundations - one at each end of the Galaxy. The idea was that the two would eventually mesh, forming a new, stronger Foundation - the Second Foundation. The series, known as the Empire series, is about the generations on those worlds, their lives, battles and victories.

The current book begins with a battle between the Empire and the Foundation. Bel Riose of the Empire is a soldier who is only happy fighting for the Empire. In the current time of peace, he goes to the outer limits of the Galaxy in search of worlds to conquer. He encounters little resistance and claims new planets for the Empire, but is told that Seldon's Plan predicts that the Empire will not succeed. Riose, in a moment of weakness, calls for backup reinforcements though he manages continuous victories. The Emperor of the Empire, Cleon II, fears that Riose is amassing troops for a civil war to overthrow the throne and hauls him home to be executed. Riose is stopped, and the Foundation "wins," making Seldon's prediction true.

The next crisis faced by the Foundation occurs a century later. A scientist named Ebling Mis figures the date of Seldon's next prediction, and a group of dignitaries is amassed to hear the words. Seldon's prediction includes the advice to "compromise" with the Traders who are currently in an uprising against the Foundation. A member of the Traders, Randu, is present and admits that the Traders had planned a revolt but were sidetracked when the Mule began attacking the Empire and the Foundation. As it became evident that the Mule was succeeding in his quest for Galaxy domination, the Traders put their resources into fighting the Mule instead. No sooner do the people realize that Seldon's prediction is true than the Mule attacks Trantor where they are gathered to hear the prediction.

Meanwhile, newlyweds Bayta and Toran have stopped off at Toran's home planet, Haven II, to visit briefly with Toran's uncle, Randu, and his father, Fran. Upon a request from his father and uncle, Toran and Bayta travel to the resort planet, Kalgan, where they are to search for the Mule in an effort to join his forces with those of the Traders against the Foundation. They believe their quest fails though they take in Magnifico, a clown who was once an entertainer for the Mule. They will later learn that Magnifico is actually the Mule and that he hopes they, along with Mis, will discover the location of the Second Empire so that he can defeat it and rule the Galaxy.

The Mule is a mutant, able to control emotions. His forces seldom have to do battle as the Mule transfers a sense of helplessness onto the people, which causes them to typically give up without a fight. It seems likely that the few battles that occur happen, because the Mule has not had the opportunity to control those adversaries' minds.

Bayta finally puts it together, realizing that they narrowly escaped several times when the Mule's forces were near, and that it was simply too much of a coincidence to be believed. She kills Mis before he can reveal the location of the Second Foundation and says that she's figured out that Magnifico and the Mule are one and the same. It's then that the Mule says that he hasn't interfered with Bayta's mind, because she liked him without his interference and that he relished that novelty. Because of that, he didn't realize her intentions before she killed Mis, eliminating the possibility of the Mule finding the location of the Second Foundation from the scientist. Vowing to travel until he locates it, Magnifico leaves Bayta and Toran unharmed.

More summaries and resources for teaching or studying Foundation and Empire.