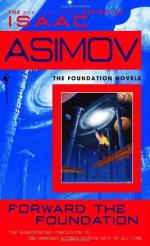 Isaac Asimov
This Study Guide consists of approximately 78 pages of chapter summaries, quotes, character analysis, themes, and more - everything you need to sharpen your knowledge of Forward the Foundation.

This detailed literature summary also contains Topics for Discussion and a Free Quiz on Forward the Foundation by Isaac Asimov.

Isaac Asimov's last novel, Forward the Foundation, continues the story line of Prelude to Foundation, showing mathematician Hari Seldon in middle and old age continuing the struggle to turn his theory of psychohistory into a tool capable of restoring human civilization after the Galactic Empire destroys itself. The book sets the stage for Asimov's seminal Foundation.

Forward the Foundation by Isaac Asimov looks in on the life and work of Hari Seldon at roughly ten year intervals. Hari's concern about aging and not perfecting his brainchild, psychohistory, as a reliable tool for predicting the future sweep of history, deepens with each passing decade. Hari is in his forties as the novel opens. He finds himself drawn to help his old robot friend and benefactor, Eto Demerzel, First Minister to Emperor Cleon I, to survive a populist political crisis as the Empire begins eroding badly. Thanks to undercover work by son Raych, they defeat the Joramunites, but Eto then unburdens himself, placing the heavy mantle of office on Hari's shoulders, and vanishes.

Hari in his fifties is a reluctant First Minister, feeling that the time he gives to the job robs the vital psychohistory project. When remnants of the Joramunites target Hari for death, Raych again goes underground to infiltrate them. He is recognized and drugged to do the actual killing, but his soon-to-be wife, Manella, a security officer posing as a prostitute, comes to the rescue. The Emperor, however, is killed by a disgruntled gardener and Hari must resign in disgrace. He resumes full-time scientific research.

As he faces the trauma of turning sixty, Hari is at odds with the military junta that succeeds Cleon and heads a large staff in the Psychohistory Project in which some think he is due to retire. The Project is making great strides, thanks to a new invention, the Prime Radiant. Dors Venabili, Hari's protector and mate, uncovers a plot but only too late finds that it is aimed at her. Hari is never the same after losing his beloved, if frustrating, Dors. Growing infirm at 70, but is still vigorous in mind, Hari fights against budget cuts that threaten to end the Project. He leans on granddaughter Wanda, whom he discovers to be psychic. She provides the key to a Second and hidden Foundation to guide the Galaxy to restoration over 1,000 years. Having arranged the future, Hari dies alone at work at the age of 81.

More summaries and resources for teaching or studying Forward the Foundation.