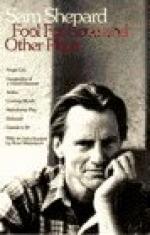 In this essay, Petrusso compares and contrasts the play and the film version ofFool for Love.

Sam Shepard wrote the stage play for Fool for Love in 1983. Two years later, Shepard wrote the screenplay for the filmed version of Fool for Love and appeared in the movie as Eddie. Thus, Shepard was able to make his mark on two different versions of the same story. He had to meld each to the demands of their respective genres but also had a chance to expand on and explore different ideas within his core story. In this essay, the differences and similarities between the two versions will be discussed, as well as what these aspects say about the core story.

At the heart of both the film and stage versions of Fool for Love is the tumultuous relationship between half-siblings Eddie and May. This conflict drives the plot and...