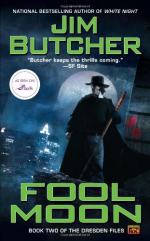 Jim Butcher
This Study Guide consists of approximately 28 pages of chapter summaries, quotes, character analysis, themes, and more - everything you need to sharpen your knowledge of Fool Moon.

Harry Dresden is struggling to pay for a meal, let alone his bills. Therefore, when Kim Delaney calls him and offers to buy him a steak dinner, he jumps at the chance. However, Kim’s offer comes with a request for information. When Harry sees the circle Kim wants to learn about, he refuses to give her the answers she needs because he knows that Kim is not strong enough to control the depth of magic she wants to play with.

After Kim leaves, Dresden is joined by Karrin Murphy, the head of Special Investigations, a division of the Chicago Police Department that deals with unusual crimes. Murphy had been a steady employer of Dresden’s, but had recently stopped hiring him. He believed that was because Murphy was angry with him for lying to her on a former case. However, he learns that she has backed away from him because their last case together left her under investigation by internal affairs.

Murphy wants Dresden to accompany her to a crime scene. When they arrive, Dresden is surprised to find that one of John Marcone’s men has been torn apart by what appears to be an unusually large animal. As Dresden and Murphy discuss this murder, they are joined by several FBI agents. There is some argument as Murphy is accused of overstepping her jurisdictional rights. One of the FBI agents pulls a gun on Murphy. Dresden saves her from being shot.

Dresden uses magic to attempt to locate the murderer. He stumbles over a group of young people who appear to be following an older woman. Dresden is unable to find out who they are, however, because the woman seems aware that he is there and they escape.

Dresden speaks to a spirit he keeps in his lab and learns more about werewolves. There are multiple kinds of werewolves and Dresden believes that they are dealing with the worst kind. He takes the report he has written about this information to the police station. While there, one of the FBI agents asks him to check out a gang in Chicago who have a reputation that suggests they could be responsible for the murders. However, when Dresden arrives, he discovers that the gang is a group of werewolves who are insulted by his attempt to usurp their territory. The leader of the werewolves vows to kill Dresden.

Dresden learns of another murder. Murphy takes him to the new scene. Dresden is saddened to discover that the new victim is Kim Delaney and that she has been killed in the home of Dresden’s newest suspect, Harley MacFinn. MacFinn is an environmentalist who has made an enemy of Marcone because they both want to buy specific parcels of land for opposing reasons. Dresden has also learned from a demon he has bribed for information that MacFinn’s family was cursed by Saint Patrick making all the male decedents in his family loup-garous, the worst kind of werewolf.

Murphy arrests Dresden because she believes that he is involved in Kim’s death somehow. While waiting to be taken to the police station, Dresden is joined in the car by Tera West, MacFinn’s fiancé. She asks Dresden to help save MacFinn. He agrees and they escape together, but Dresden is shot in the process. West does the best she can to help Dresden before taking him to find MacFinn. MacFinn admits to killing Kim, but says it was because she was not able to work the magic as she had promised. Kim was not able to create a circle to hold MacFinn while he was in his loup-garou form.

Murphy and the FBI come after Dresden and MacFinn. Dresdan and West get away, but MacFinn is caught. Dresden decides he must go to the police station to create the circle to hold MacFinn before he can turn into the loup-garou, but he does not make it there in time. MacFinn turns and kills several inmates before getting loose and going after the police. Murphy has made silver bullets from an inherited pair of earrings, making it possible to slow the creature, but they are not strong enough to kill him. Dresden manages to use magic to send the loup-garou away.

Dresden is chased from the police station by the werewolf crime gang. They manage to kidnap Dresden and take him to their hang out. Dresden wakes to find himself tied up, and learns that Marcone has made a deal with the gang to keep him alive. When Marcone arrives, Dresden manages to escape only to run headlong into the FBI. Dresden learns the FBI agents are another type of werewolf, werewolves that get their power from belts they wear around their waists. Dresden overpowers one and escapes.

Dresden and West, along with her group of young werewolves, go to Marcone’s property where they know the FBI will be waiting for MacFinn to show up. Dresden and his pack of wolves are initially knocked down, but they manage to win the day when Dresden uses the stolen belt to turn into a werewolf himself and take out the FBI agents. Dresden also uses a pentagram his mother gave him to stop the loup-garou.

More summaries and resources for teaching or studying Fool Moon.