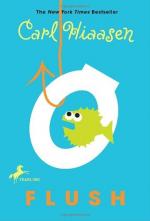 Flush by Carl Hiaasen is the story of Noah Underwood, a youngster who lives in the Florida Keys with his mother, father and younger sister. Life is carefree for young Noah spending his days fishing, snorkeling, boating and hanging with friends and sister in the warm Floridian surf and sun. But things change when suddenly his father, Paine, winds up in jail.

Noah visits his father and is at first confused why his good and loving father is in jail. He learns that Paine sunk the gambling boat, the Coral Queen, that was moored in a local marina because it was dumping sewage—including human waste—into the pristine waters of the marina. Once Noah fully understands the danger of this practice, he is on board with his father.

Noah loves both his parents and has to play the peacemaker between them. His father is a nature lover and had a rather impulsive personality. He doesn't think before he speaks. Donna, Noah's mother, loves her husband dearly but she is at the end of her rope with his antics. He's been guilty of erratic behavior in the past and Donna's reached her boiling point. She loves the beautiful water and beaches just as much as her husband does but she has her children to think of and her mortgage to pay.

Noah and his younger sister, Abbey, decide to investigate the Coral Queen themselves, which had been refloated, cleaned and put back into operation. The kids do some surveillance work and confirm that the owner is still dumping sewage into the water. On the suggestion of Paine, the kids recruit the help of Lice, a sleazy guy who used to work on the boat. When Lice mysteriously goes missing, his girlfriend, Shelly, offers to help. She knows the owner and gets a job as a bartender on the boat so that she can have access to the boat's daily operations.

Noah, Abbey and Shelly plot to expose the boat's owner once and for all. Noah and Abbey pool all their money together and buy dozens of vials of bright pink food dye. Shelly sneaks Noah on the boat and the two of them split the dye bottles between them and squeeze the thick fuchsia gel into the toilets of the gambling boat. With each bottle of dye they drop into the toilet system, they flush the toilets until they run clear. The next morning, an aerial observation by the Coast Guard confirms that the bright pink stream coming from the Coral Queen is evidence of their continued pollution of the pristine waters of the marina.

Along the way, Noah and Abbey must deal with the boat owner's hateful son and his friend and his Moroccan thuggish bodyguard. Miraculously, Noah's long-lost grandfather, Grandpa Bobby, reappears on the scene to help his son and grandchildren. In the end, the ship is finally put out of operation in a most unexpected way. The authorities are finally on to the criminal activities of the owner and the Underwood family survives it all in one piece. Noah is able to resume the life of a young boy and return to his carefree life on the surf and sands of his Florida Keys home.