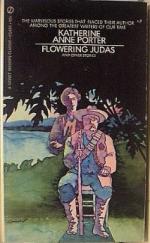 Katherine Anne Porter
This Study Guide consists of approximately 55 pages of chapter summaries, quotes, character analysis, themes, and more - everything you need to sharpen your knowledge of Flowering Judas.

Katherine Anne Porter allegedly wrote "Flowering Judas" in a single evening in December of 1929. After writing the story, she then rushed out after midnight that same night to mail it to the literary magazine Hound and Horn. Regardless of this anecdote's accuracy, it is indisputable that "Flowering Judas" represented an artistic breakthrough for Porter. The next year—1930—she named her debut collection of short stories after this richly symbolic tale of an alienated young American woman set in Mexico City just after the Mexican Revolution. Flowering Judas and Other Stories garnered enthusiastic critical praise. Reviewers were consistently impressed with Porter's original narrative style, her complex and tightly controlled symbolism, and her beautifully intricate language. "Flowering Judas" remains a staple of anthologies and is considered one of the best works of a master of the short story form. Its complex symbolism has intrigued several generations of readers and scholars.

The character of Laura, the story's protagonist, is set against that of Braggioni, a corrupt revolutionary leader who is courting her. The story takes place during an evening they spend together, as Braggioni's singing and conversation mirrors Laura's growing disenchantment with the revolutionary ideal that brought her to Mexico. Laura, a former Catholic, rejects the hypocrisy of the socialist revolutionaries who have come to power and she rejects the advances of Braggioni and several other ardent suitors, which leads to a crisis of faith and a sense of acute isolation. The theme of lost faith is amplified through the story's Christian imagery, central to which is the complex figure of the flowering Judas, named for Christ's betrayer.

More summaries and resources for teaching or studying Flowering Judas.

Flowering Judas from Gale. ©2005-2006 Thomson Gale, a part of the Thomson Corporation. All rights reserved.