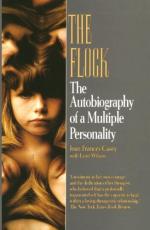 Flock: The Autobiography of a Multiple Personality Summary & Study Guide

Joan Frances Casey
This Study Guide consists of approximately 30 pages of chapter summaries, quotes, character analysis, themes, and more - everything you need to sharpen your knowledge of Flock.

Flock: The Autobiography of a Multiple Personality Summary & Study Guide includes comprehensive information and analysis to help you understand the book. This study guide contains the following sections:

This detailed literature summary also contains Topics for Discussion and a Free Quiz on Flock: The Autobiography of a Multiple Personality by Joan Frances Casey.

Joan Casey was in her twenties, a student at the University of Chicago and dealing with the breakup of a marriage when she sought out a therapist she could talk to about the escalating stress in her life. The therapist, recommended by the university, was Lynn Wilson. Over the course of only a couple of sessions, Lynn recognized what she believed to be Multiple Personality Disorder. Over the coming months, Lynn met twenty-four distinct personalities. The most prominent of those were Renee, Jo, Joan Frances, Isis and Missy. Each had distinct characteristics, mannerisms and memories. Some of them harbored memories of childhood abuse at the hands of both her parents. Abusive situations and the need to get along prompted the creation of most of the personalities. Renee, who had arrived when Joan was raped by a teacher, was able to see the majority of what happened with all members of the Flock and became dominant in most situations.

Though hampered by the personalities, there were advantages as well. Many of the personalities did specific duties. Some were very intellectual while others were able to cook or clean. One - a male named Doug - learned to play golf when that became an expected skill. As the therapy progressed, Renee made certain that the body made it to each session with the idea that she was healthy and was only trying to make life comfortable for the Flock as a whole. Both Renee and Jo initially refuse the idea of integration, though that's more or less what eventually happened.

Renee, encouraged by her boyfriend, applied for graduate school at Harvard and was accepted. There, she found added stress in the coursework but divided up the classes so that those who excelled at particular aspects of learning could take those classes. She found acceptance among two close friends who quickly accepted her personalities, just as Lynn and Gordon had done.

The final stress on the system was prompted by Joan Frances, who couldn't seem to accept the abuse at the hands of her father and wanted only to fulfill her mother's prophecy that she was psychotic. Near suicide and with no help at hand, the Flock created a mediator personality called "Unity" that resulted in a log of internal conversations aimed at helping hold things together. Reassured of Lynn and Gordon's continued love and support, Joan Frances bought a puzzle in the shape of an egg and Renee glued it together - a symbol of her own personality. Though the new fused personalities - which called herself Joan - said it wasn't exactly like being integrated, she became a unified being displaying aspects of all the personalities that had previously split her life.

More summaries and resources for teaching or studying Flock: The Autobiography of a Multiple Personality.

Flock: The Autobiography of a Multiple Personality from BookRags. (c)2022 BookRags, Inc. All rights reserved.