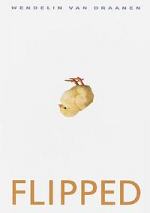 Wendelin Van Draanen
This Study Guide consists of approximately 33 pages of chapter summaries, quotes, character analysis, themes, and more - everything you need to sharpen your knowledge of Flipped.

This detailed literature summary also contains Topics for Discussion and a Free Quiz on Flipped by Wendelin Van Draanen.

"Flipped" by Wendelin Van Draanen tells the story of two youngsters whose diverse views of their relationship evolve over many years until those perspectives are "flipped." The story begins when seven-year-old Bryce Loski moves into a new house across the street from the Bakers. Seven-year-old Juli Baker has been eagerly anticipating the arrival of her new neighbors for weeks ever since she learned that a boy her age would be living there.

On the day the Loskis are unloading their truck, Juli races over to introduce herself. She is mesmerized by the cute boy with the brilliant blue eyes. Juli is a high-spirited young girl who is open and friendly. When she jumps into the moving van to help, young Bryce is immediately annoyed. He finds her aggressive and does not like her muddy shoes. He spends the next two weeks doing everything he can to avoid being around his new neighbor who relentlessly pursues him. Juli recognizes that he is withdrawn and not around much but she attributes that to his shyness.

The relationship remains in this mode from second grand through sixth grade. The entire time the very smart Juli allows her heart to rule her head. She does not pick up on the signals that Bryce sends off, namely, that he doesn't want anything to do with her. She takes every opportunity to endear herself to him. She whispers the correct spelling of word in his ear during spelling tests, she climbs a huge tree to retrieve his kite that is caught in the branches, and she gives his family eggs every week from her pet chickens.

Bryce spends those same years trying to avoid Juli. His flaw is that he allows Juli's obsession to persist without confronting it directly. He has a passive-aggressive approach to ridding his life of the annoying little girl. In fifth grade, he holds hands in front of her with another girl, who happens to be Juli's mortal enemy. He takes the eggs from Juli each week for two years but immediately throws them in the trash. He tells his friend Garrett how he really feels about his irritating neighbor but fails to tell Juli herself.

But things begin to flip when the maturing Bryce begins to recognize how smart and accomplished Juli is and that she is a person of substance. He first envies then grows to admire the great and lively spirit lives within her. He also notices how beautiful she is. When the tables turn and Juli discovers that Bryce hasn't been honest with her, she wants nothing to do with him. Of course, that sets the stage for Bryce's obsession to win her back. The two kids begin the story far apart in many ways, separated by dishonesty and misunderstanding. In the end, the gap between them shrinks and establishes the foundation for an honest and growing relationship.

More summaries and resources for teaching or studying Flipped.