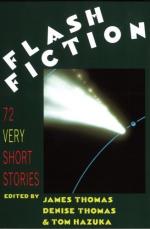 +Chapters Summary and Analysis
Brilliant Silence through Crossing Spider Creek
The Lampshade Vendor through Gold Coast
Mr. Mumsford through The Father
Love Poems through The Appalachian Trail
Dinner Time through the Colonel
Snow through Subtotals
Fingers through Grace Period
The Haircut through the The Burlington Northern, Southbound
The Cage through The Paring Knife
The Widow through the Parents
Water through Space
Fear: Four Examples through The Factory
The Sewers of Salt Lake through Yoghurt
A Chronicler's Sin through Deportation at Breakfast
Free Quiz
Characters
Objects/Places
Themes
Style
Quotes
Topics for Discussion
Order our Flash Fiction: Very Short Stories Study Guide

James Thomas (professor)
This Study Guide consists of approximately 43 pages of chapter summaries, quotes, character analysis, themes, and more - everything you need to sharpen your knowledge of Flash Fiction.

A Chronicler's Sin through Deportation at Breakfast Summary

During the reign of terror, nightly arrests are made throughout the land. Hooded men knock on doors in the middle of the night and take whole families away. The population of the town begins to shrink because there are so many people in jail. Houses, abandoned by families taken prisoner, are turned into jails. Priests and merchants alike are arrested. People begin to spy on one another. So many people are arrested it is difficult to say who is in charge of the town. Eventually, all the prisoners are like everyday citizens and begin leading normal lives and seem happy. Several years later, everyone denies that the night raids ever occurred.

Elvis lives three houses away from a man. He watches him come and go and waves...