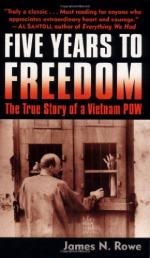 James N. Rowe
This Study Guide consists of approximately 26 pages of chapter summaries, quotes, character analysis, themes, and more - everything you need to sharpen your knowledge of Five Years to Freedom.

Five Years to Freedom: The True Story of a Vietnam POW Summary & Study Guide includes comprehensive information and analysis to help you understand the book. This study guide contains the following sections:

This detailed literature summary also contains Topics for Discussion and a Free Quiz on Five Years to Freedom: The True Story of a Vietnam POW by James N. Rowe.

In 1963, Nick Rowe is with a group of Vietnamese soldiers on a routine mission when they encounter Vietcong soldiers. In the fight, Rowe and a fellow soldier are captured. Rowe realizes the seriousness of his situation but is unable to do anything about it immediately. As time passes, Rowe is often weakened and is constantly pushed to declare that the Vietcong are justified in all aspects of the war and that his own countrymen are wrong. Failure to do so continually prompts varying degrees of punishment. For five years his captors work to instill a series of propaganda statements into Rowe's mind and Rowe continues to disbelieve his captors.

Rowe is a military man, having decided to attend West Point because his older brother was killed prior to his own graduation. Rowe is deployed to Vietnam without really knowing all the politics involved. Rowe comes to like many of the Vietnamese people and sometimes helps with distribution of medicine and other activities. After his capture, he becomes bombarded with information that the Vietnamese people as a whole support the Vietcong and that the American prisoners are in danger of being attacked by the general populace. After several years as a prisoner, he is taken on a tour of the region - ostensibly to see the true state of the people. He encounters some people who remember him from his days as a soldier so many years earlier. One risks punishment to touch Rowe on the shoulder and an elderly woman speaks up and questions the reason Rowe appears to be undernourished. Rowe leaves that situation and finds his resolve to remain strong against the pressure to admit to "crimes" against the Vietcong.

Rowe encounters several other prisoners during his time as a POW. Some of those survive and are released. Others die while Rowe watches, helpless to do anything to prevent it. He is held alone during his final months as a prisoner and he finds the situation initially frightening but then finds a new freedom in that he is no longer responsible for anyone else. When Rowe and his captors are fleeing American bombers, he arranges the opportunity to be alone with a single captor then hits the man over the hand to get away so that he can flag down a passing helicopter. His mother's words, when she knows that he is safe, are, "What took you so long?"

Rowe is a strong person and remains so in the face of near-starvation and psychological torment. One of the most serious moments of torment for him comes when American bombers are striking the camp and he comes to fear that he'll die at the hands of his own people.

More summaries and resources for teaching or studying Five Years to Freedom: The True Story of a Vietnam POW.

Five Years to Freedom: The True Story of a Vietnam POW from BookRags. (c)2022 BookRags, Inc. All rights reserved.