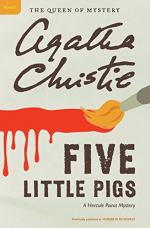 Information withheld from a fifteen-year-old murder case ultimately helps private detective Hercule Poirot determine that the woman convicted of the crime was actually innocent. Poirot was hired by Carla, the daughter of the deceased Caroline, to prove that Caroline did not kill her husband, the famous painter Amyas Crale. Before she died in prison, Caroline had written a letter to her daughter claiming that she was innocent of the murder. Because Carla was engaged to be married, she wanted to be sure that she had inherited no murderous tendencies from her mother.

Poirot agreed to take on the case and first talked to the people involved in the investigation and trial of the murder case. Caroline was accused of poisoning her husband because he was leaving her for another woman. In the trial, it was said that Caroline had not put up much of a fight in her defense, even though she had claimed her innocence. She reasoned that Amyas must have felt some remorse for leaving her for a younger woman and killed himself. There was no evidence that supported this claim of suicide even though it was the main defense strategy in the trial.

After having talked to those involved in the original case, Poirot identified five people who had been with Amyas and Caroline the day of the murder. These people were Elsa Greer, the young woman who was Amyas lover; Phillip Blake, Amyas’ best friend; Meredith Blake, Phillip’s brother and amateur herbalist; Cecilia Williams, the governess; and Angela Warren, Caroline’s younger sister. Poirot first interviewed these people in person, and then requested they write a narrative of the events surrounding Amyas’ death. Poirot’s investigation not of just hard facts, but also intentions and personalities, led him to identify the real murderess.

Eventually, Poirot was able to prove that Caroline had no idea how the crime had been committed and thus could not have murdered her husband, the act of which she had been convicted. Poirot was able to prove this using only evidence culled from the interviews he performed with people connected to the case in various ways. Ultimately, the murderer was revealed to be Elsa Greer, who murdered Amyas because he was going to leave her and be faithful to his wife.