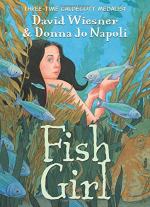 David Wiesner
This Study Guide consists of approximately 37 pages of chapter summaries, quotes, character analysis, themes, and more - everything you need to sharpen your knowledge of Fish Girl.

The following version of this book was used to create this study guide: Wiesner, David and Napoli, Donna Jo. Fish Girl. Clarion Books, 2017.

Fish Girl lives in an aquarium designed like a house, where every room is filled with water, and the visitors walk through the corridors and hallways to look at the exhibits. There is a variety of different species in the aquarium, but Fish Girl is the star attraction. The owner of the aquarium, Neptune, claims to be the God of the Sea, and he tells visitors that Fish girl lives in the aquarium, but she is shy, so the visitors should try to find her. Neptune tells Fish Girl that she must never let anyone see her wholly, so she must be elusive. The visitors drop coins in the water tanks, so it is Fish Girl’s job to swim around and scavenge them after the aquarium closes. At the end of every day, if Fish Girl does her job well, Neptune rewards Fish Girl by telling her a story.

On the first day, when visitors are starting to leave the aquarium, a girl named Livia notices Fish Girl, which causes Fish Girl to hide. At the end of the day, Neptune reprimands Fish Girl for being careless, and tells her a story. Fish Girl sees Neptune as a father figure at this point in the graphic novel.

The next day, Fish Girl does her job as usual. Livia returns, and manages to get some time alone with Fish Girl in a restricted area. Livia tries to talk to her, but Fish Girl cannot speak, so the conversation is one sided. Eventually, Neptune finds Livia in the restricted area and asks her what she is doing. As they converse, Fish Girl eavesdrops, and starts to get suspicious about whether Neptune is actually the God of the Sea. Livia does not mention Fish Girl, and Neptune sends Livia away.

The following day, Fish Girl spends the day looking for shells to make a necklace for Livia. When Neptune does a show that causes waves to appear, Fish Girl notices a machine creating the waves. Neptune goes home without telling Fish Girl a story because she did not generate enough money. By herself at night, Fish Girl realizes that Neptune uses buttons on his trident to activate the wave machine, so she climbs out of her water tank to confirm her theory. She struggles to return to her water tank because her tail aches, so her best friend, the octopus, pulls her back in.

The next day, Fish Girl finds more shells for the necklace, and does a good job, so Neptune tells her a story about Fish Girl’s mother. Neptune gets frustrated and leaves after Fish Girl pulls his leg when he mentions her mother’s voice. When she is by herself, Fish Girl leaves her water tank again to try on a shirt. After some time, her tail starts to disappear and it is eventually replaced by legs. Fish Girl walks to Neptune’s office and finds a photo album which reveals the fact that Neptune was actually a fisherman, not the God of the Sea, and that the octopus had been with Fish Girl her whole life. When Fish Girl re-enters her tank, her tail grows back.

The next day, Livia gives Fish Girl a name: Mira, which is short for Miracle. Mira becomes resentful of Neptune, so Neptune leaves without telling her a story. Mira uses this time to practice speaking, and exercising her legs. At night, she leaves the aquarium to explore the outside world. She goes to the ocean, which gets more violent as she approaches.

The following day, Mira does a good job, but refuses Neptune’s offer to tell her a story, so Neptune leaves once more. Fish Girl leaves the aquarium again and explores the fairground nearby. After a series of uncomfortable encounter with other humans, Mira rushes back to the aquarium as the ocean becomes more and more restless.

The next morning, all of the other fish in the aquarium start to avoid Mira. Mira waits for Livia to arrive, and when she does, Mira gives her the necklace and invites her into the tank to swim. When Mira is about to reveal the fact that she transforms on dry land, Neptune catches them and orders Livia to leave. Neptune starts to reprimand Mira, so she stands on a rock and reveals her legs. Suddenly, an immense storm breaks out, and the octopus grabs Neptune so Mira can escape. The storm destroys the aquarium, and all of the exhibits escape into the ocean. Mira dives into the ocean, but she does not transform into a mermaid. Instead, the ocean pushes her onto the shore. The novel ends when Mira notices Livia and manages to call her name, and they walk away from the wreckage together.

More summaries and resources for teaching or studying Fish Girl.