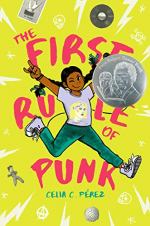 Celia C. Pérez
This Study Guide consists of approximately 56 pages of chapter summaries, quotes, character analysis, themes, and more - everything you need to sharpen your knowledge of First Rule of Punk.

This detailed literature summary also contains Quotes and a Free Quiz on First Rule of Punk by Celia C. Pérez.

Malu is a 12-year-old girl living in Florida until her mother, Magaly, gets a job at a college in Chicago and announces they are moving. Malu has few friends in Florida and no one she is really going to miss other than her father, Michael. Though Malu objects to the move, she has no choice but to go. Malu and Magaly arrive at their apartment in Chicago, and Malu notes that there is a welcome mat with the words “Home, sweet home” at the entry. She does not feel that this is home. Magaly suggests they will paint the walls and add some curtains to make it feel more like home, but Malu cannot imagine that will ever happen. A few days later, Magaly begins by painting a wall tangerine.

Malu embraces the punk lifestyle. She dresses in punk style and chooses punk music. She also follows a code of conduct she associates with punk. These include being true to oneself. Malu's father understands that because he also embraces the lifestyle and the music. Magaly is Mexican; she does not understand many of Malu's choices. She disapproves of Malu's clothing, and Malu feels that Magaly criticizes everything she does.

Malu attends the Jose Guadalupe Posada Middle School where Spanish is a requirement. Thought many other Mexican students attend the school., Malu does not immediately find a group of students who share her passion for punk. Malu is soon spending much of her time in the library, avoiding interaction with other students. One exception is Selena Ramirez, the daughter of a dance instructor. Selena is often rude and advises Malu not to be weird. The problem is that she obviously considers Malu weird and she makes her disdain clear. On a whim, Malu signs up for a talent show and plans to put together a punk band. She recruits Joe Hidalgo, the son of Ana who owns a coffee shop in the neighborhood. Joe recruits Benny, a boy who plays in the school band, and Malu recruits Ellie, a young red-head who considers herself an activist and is already looking forward to college. Though the four have little in common, they discover they love making music together. The next problem arises when they are cut from the talent show because the principal deems their loud music inappropriate for the event. Malu is heartbroken at first, but the group decides to fight the ruling by staging an event of their own, outside the school after the talent show is over.

Their performance is a hit, and the four gather with their parents – including Michael who came to Chicago just to see Malu perform. As Malu considers her group of friends, she realizes she has found a place to belong and that she is happy here. Malu and Magaly come to a new understanding. Their relationship is strengthened because of it. Malu also accepts that being punk is a complex set of pieces, just as being Mexican is complex. The two are not mutually exclusive.

More summaries and resources for teaching or studying First Rule of Punk.