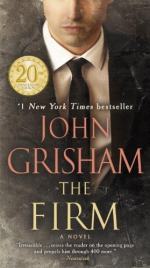 Get The Firm from Amazon.com
View the Study Pack
View the Lesson Plans
Study Guide
Order our The Firm Study Guide

John Grisham
This Study Guide consists of approximately 43 pages of chapter summaries, quotes, character analysis, themes, and more - everything you need to sharpen your knowledge of The Firm.

The Firm Summary & Study Guide includes comprehensive information and analysis to help you understand the book. This study guide contains the following sections:

This detailed literature summary also contains Related Titles and a Free Quiz on The Firm by John Grisham.

The Firm is the story of Mitch McDeere's employment with the Bendini, Lambert, and Locke law firm. Mitch is a young, ambitious man who recently graduated from Harvard law school. Having excelled in his law program and possessing a strong character, he is recruited by the exclusive firm. The firm promises him a lifestyle that he and his wife, Abby, had never dreamed was possible. The firm provides them with a BMW, low rate mortgage, sign-on bonus, a cash bonus for passing the bar exam, study aid for the bar exam and continuing education following it, the use of a corporate jet and international accommodations, and it repays all of Mitch's outstanding student loans. All of these "perks" are in addition to a great salary and guaranteed partnership in ten to fifteen years. Mitch and Abby are lured by the instant lifestyle upgrade. They are quickly disillusioned by what comes along with the benefits.

Employment with the firm is meant to be permanent, and some of the previous partners have died under mysterious circumstances at fairly young ages. Mitch can't help but wonder what is in store for him. As the story unfolds, Mitch learns that he is being followed and all of his conversations are recorded. The surveillance extends beyond his office and into his car and home. Mitch is approached by an FBI agent, Wayne Tarrance, who would like Mitch to cooperate with FBI officials to infiltrate the Bendini law firm. He informs Mitch that the law firm has ties with the Moroltos, a mafia family known for its criminal activity. The FBI suspects that the Bendini firm is a front for the Morolto's illegal activities and money laundering. Mitch agrees to help covertly. He makes and supplies thousands of photocopies of secret internal documents to the FBI, risking his life to do so. Along the way he is aided by Abby as well as his other friends,Tammy and Barry. The law firm's head of security, DeVasher, has suspicions about Mitch's behavior. He makes plans to eliminate Mitch. Mitch escapes just in time and becomes the subject of an inter-state chase with both the FBI and private surveillance teams following him. Mitch and Abby do escape, along with Mitch's brother, Ray, and the FBI successfully prosecutes the Bendini employees.

More summaries and resources for teaching or studying The Firm.

The Firm from Gale. ©2005-2006 Thomson Gale, a part of the Thomson Corporation. All rights reserved.