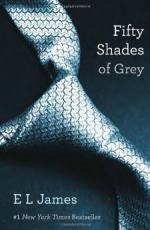 E. L. James
This Study Guide consists of approximately 23 pages of chapter summaries, quotes, character analysis, themes, and more - everything you need to sharpen your knowledge of Fifty Shades of Grey.

Fifty Shades of Grey: Book One of the Fifty Shades Trilogy Summary & Study Guide includes comprehensive information and analysis to help you understand the book. This study guide contains the following sections:

This detailed literature summary also contains Topics for Discussion on Fifty Shades of Grey: Book One of the Fifty Shades Trilogy by E. L. James.

Fifty Shades of Grey is the first in a trilogy of erotic novels by E.L. James. In this novel, Anastasia Steel meets business tycoon, Christian Grey, while doing an interview for her roommate, Kate. Ana is instantly attracted to the handsome Christian Grey, but he lives in a world completely alien to her. Despite his initial reluctance, Ana and Christian grow closer and he introduces her to his world with all the honesty and patience that he can muster. At first it seems like an adventure to Ana, but soon Ana finds herself involved in things that she does not fully understand. Fifty Shades of Grey is a novel of intimacy that explores the darker side of humanity and how some people come to deal with it.

The story begins with Anastasia Steel volunteering to do an interview for her friend, Kate, when Kate comes down with an untimely case of the flu. The interview is of Christian Grey, a young business tycoon who is an important donor to their university. Ana is nervous and ill-prepared. The interview goes well despite this, except when Ana asks Christian a question that clearly annoys her. Ana is disturbed not by the interview, but by Christian's intensity and his amazing good looks. Therefore, when he shows up at the hardware store where she works a few days later, she finds herself unable to hide her nervousness.

Christian agrees to a photo shoot for the article that Kate is writing based on Ana's notes. Due to the fact that Ana set up the shoot, she attends the event. Afterward, Christian asks her to coffee. They have a pleasant conversation, but he ends the date by telling her that he is not the man for her. Ana is disappointed by this announcement. When Christian sends her some very expensive books a few days later, she is also confused.

Ana goes out drinking with her friends after their final exams are finished. Ana becomes very drunk and decides to call Christian. Concerned for her safety, Christian comes to pick Ana up and arrives just in time to find her fighting off the advances of a friend. Christian whisks her out of the bar and takes her back to his hotel room. When Ana wakes the next morning, Christian again tells her that he does not do girlfriends. However, Christian tells Ana that if she is interested in a sexual relationship with him, there are things he needs to show her and paperwork she must do.

Ana goes to Seattle with Christian where he takes her to his home. Once there, Christian shows Ana a room in his home that she calls the Red Room of Pain. This room contains equipment used in sexual play between Dominants and Submissives. Christian then explains his rules and the contract Ana would have to sign if she were to agree to be his submissive. For several days, Ana and Christian discuss the contract back and forth. Ana becomes overwhelmed and decides to go to visit her mother in Georgia for a few days.

While in Georgia, Ana finds herself missing Christian despite their constant communication over email. Christian surprises her by showing up unannounced. Ana and Christian spend the night together and she bribes him into telling her some of the secrets of his past. Afterwards, Ana agrees to sign his contract.

Christian leaves Georgia unexpectedly. Ana follows the next day. Ana goes straight to Christian's apartment. They argue over Christian's desire to punish her for rolling her eyes at him. Ana finally gives in, asking him to punish her to the extreme so she will know what to expect when she signs the contract. However, Ana is so shocked by the brutality of this punishment that she decides she can no longer be involved with Christian. Ana leaves.

More summaries and resources for teaching or studying Fifty Shades of Grey: Book One of the Fifty Shades Trilogy.

Fifty Shades of Grey: Book One of the Fifty Shades Trilogy from BookRags. (c)2022 BookRags, Inc. All rights reserved.