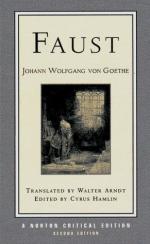 Johann Wolfgang von Goethe
This Study Guide consists of approximately 33 pages of chapter summaries, quotes, character analysis, themes, and more - everything you need to sharpen your knowledge of Faust.

Faust by Johann Wolfgang von Goethe is considered to be one of the finest works of prose in all of English literature. The book was introduced and annotated by Walter Kaufmann, a noted German translator and philosopher.

In addition to Kaufmann's lengthy introduction, the book is broken into five sections of the actual text. They are: Dedication, Prelude in the Theatre, Prologue in Heaven, The First Part of the Tragedy, and The Second Part of The Tragedy.

The Dedication serves as a type of strange epilogue during which Faust is very old and preparing to die.

The Prelude in the Theatre details a conversation between three men: The Director, a Clown, and a Dramatic Poet. The men discuss and argue over how to rejuvenate or create a play that will captivate their audience.

The Prologue in Heaven takes place between the Lord, Heavenly Hosts, Mephistopheles, and the Three Archangels - Gabriel, Michael, and Raphael.

The Lord asks Mephisto if he knows Faust. Mephisto says he does know Faust, the doctor. Mephisto comments that Faust serves the Lord in a peculiar way. The Lord says Faust is on the wrong path but He is convinced that Faust will come to Him in the end and be saved. Mephisto disagrees. The two entities make a bet as to whose path Faust will follow in the end.

The First Part of the Tragedy is the major portion of the text and crux of the entire tale of Faust.

Faust is a professor, doctor and Master of the Black Arts. Faust sits in his den lamenting the state of the world and his ongoing misery. Faust feels that his life of intellectual pursuits has taught him nothing, that it has all been a farce and is utterly useless. Faust conjures Mephisto, the devil. After a long discussion Faust makes a pact with Mephisto. Mephisto will act as Faust's servant, granting every wish, as long as Faust lives. When Faust dies, Mephisto will claim his soul and the roles will reverse.

Faust leaves the university and travels with Mephisto. Faust is granted the power he seeks. Faust sees a young maid in the town and immediately falls in love with her. Faust cannot understand what is happening to him because of this newfound power. Faust pursues the woman and wins her heart. Gretchen's brother learns of the affair and Gretchen's pregnancy. There is a duel between Faust and Valentine, during which Valentine is mortally wounded. Faust flees.

While Faust is away still seeking help from the earth spirit, Gretchen gives birth to Faust's child. Gretchen kills the child, is convicted of the crime and is sentenced to death. Faust visits Gretchen in prison to find that she has gone insane. Gretchen dies.

In Part Two of the Tragedy, Goethe presents Faust as an old man. Faust is wealthy beyond compare. Faust feels responsible for the death of an old couple on a nearby property and attempts to repent. There is a battle between Faust and the Heavenly Host. The Heavenly Host whisks Faust's soul to Heaven. The Virgin Mother intercedes on Faust's behalf and Faust's soul is saved.

More summaries and resources for teaching or studying Faust.