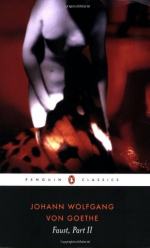 Act I of Part II of the Tragedy begins with a necessary transition from the tragic end of Part I. Gretchen and several other people have died, due, in large part, to the actions of Faust, and the plot requires some way to move away from that episode into the entirely different setting and theme of Part II. Part II begins then with a poetic and mythical prologue that serves as the first scene before the real action of the Act begins in Scene 2.

The scene begins in a "pleasant region," that is, something like a Swiss alpine meadow with Ariel, a spirit character from Shakespeare's Tempest, awakening a sleeping Faust. Ariel sings, accompanied by harps that all of the high spirit races of the earth feel for a grieving man despite his past deeds. The grieving man...