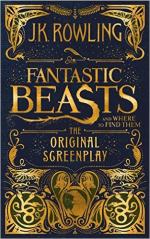 Fantastic Beasts and Where to Find Them: The Original Screenplay Summary & Study Guide

J.K. Rowling
This Study Guide consists of approximately 58 pages of chapter summaries, quotes, character analysis, themes, and more - everything you need to sharpen your knowledge of Fantastic Beasts and Where to Find Them.

Fantastic Beasts and Where to Find Them: The Original Screenplay Summary & Study Guide Description

Fantastic Beasts and Where to Find Them: The Original Screenplay Summary & Study Guide includes comprehensive information and analysis to help you understand the book. This study guide contains the following sections:

This detailed literature summary also contains Quotes and a Free Quiz on Fantastic Beasts and Where to Find Them: The Original Screenplay by J.K. Rowling.

The following version of this screenplay was used to create this study guide: Rowling, J.K. Fantastic Beasts and Where to Find Them. Arthur A. Levine Books, an imprint of Scholastic Inc., 2016.

The text consists of the original screenplay for the film of the same name, which means that its content is primarily dialogue, with occasional insertions of stage directions. There is no prose per se. There are also several illustrations of, among other things, the various beasts referred to in the story.

A brief visual prologue portrays the menace of Dark wizard Gellert Grindelwald, who is waging a campaign against those humans who are not capable of using magic. The story proper begins with the arrival of wizard Newt Scamander in 1926 New York. After getting through customs and immigration, he travels through New York City, at one point coming upon a street meeting led by Mary Lou Barebone, the leader of an anti-magic movement called The Second Salemers. As Newt watches, Mary Lou (in the company of her three children, Credence, Chastity, and Modesty) exhorts the crowd to be vigilant for the use of magic. As Newt moves on, he is unaware that he is being watched by disgraced witch Tina, and that he is about to accidentally collide with aspiring baker Jacob.

A series of accidents and confrontations involving Newt, Tina, and Jacob results in the escape of several of the beasts that Newt magically conceals in his suitcase, and in Tina taking Newt before the governing body (MACUSA) of the American wizarding community. There, Tina is dismissed: Madam Picquery, leader of MACUSA, is more concerned with the growing threat posed by Grindelwald, and with the possibility of wizards and witches being exposed to the fearful violence, or violent fear, of non-magical humans.

Still in disgrace, Tina takes Newt and Jacob to her home, where they meet Tina’s telepathic sister Queenie. As attraction begins to grow between Jacob and Queenie, Tina and Newt discuss how Newt is going to retrieve his beasts. Later that night, Newt takes Jacob down into the magical suitcase, transporting him to a place where beasts from all over the magical world are kept in a zoo-like collection of individualized habitats. Newt and Jacob discover a shared love for animal life, and Jacob resolves to help Newt in his quest.

Interspersed with all the above are scenes that reveal Percival Graves, one of Madam Picquery’s top agents, is in league with Credence Barebone to find a mysteriously powerful female child. There are also scenes that reveal the invisible, dangerous, murderous presence of a monster in the city.

As Jacob and Newt go in search of more escaped creatures, eventually helped by Tina and Queenie, Graves continues to pressure Credence to help him find the mysterious child. Eventually, this pressure combines with pressure from Mary Lou for Credence to be “normal” to push Credence to a breaking point, which leads him to manifest an Obscurus which, as conversation between Newt and Tina reveals, is a powerful force of Dark Magic designed to protect vulnerable wizards and witches from harm.

Credence’s Obscurus escapes, and causes massive destruction throughout the city. Graves pursues it, determined to control it but pretending to want to destroy it; Newt and Tina also pursue it, determined to save Credence from its power. Eventually, a confrontation between Newt, Graves, and the agents of MACUSA results in the destruction of the Obscurus, the apparent (but not certain) death of Credence, and the revelation that Graves is, in fact, Gellert Grindelwald.

The story ends with Grindelwald being taken away; with Newt getting on a boat, but promising to return to give Tina a copy of his book on beasts in person; and with Jacob, his memory of his encounters with magic magically wiped out, making a success of his bakery, and visited one day by Queenie.

More summaries and resources for teaching or studying Fantastic Beasts and Where to Find Them: The Original Screenplay.

Fantastic Beasts and Where to Find Them: The Original Screenplay from BookRags. (c)2022 BookRags, Inc. All rights reserved.