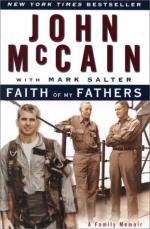 John McCain
This Study Guide consists of approximately 30 pages of chapter summaries, quotes, character analysis, themes, and more - everything you need to sharpen your knowledge of Faith of My Fathers.

Faith of My Fathers Summary & Study Guide includes comprehensive information and analysis to help you understand the book. This study guide contains the following sections:

This detailed literature summary also contains Topics for Discussion and a Free Quiz on Faith of My Fathers by John McCain.

"Faith of My Fathers" by John McCain with Mark Salter is a memoir that highlights John McCain's ancestry, focusing primarily on his grandfather, father, and on his own life. Not glamorizing their existence, this book is a real account of the triumphs and pitfalls of the military men. It carries the reader through wartime strategies from the First World War through the Vietnam war.

John McCain's grandfather, John Sidney McCain Senior, also known as Slew, came from a long line of military men. The family fought in wars for their country for over 200 years. However, he was the first one to choose the Navy. The rest of his family was part of the Army. Slew's career did not seem very promising at first. His grades at the Naval Academy were very low and he was constantly earning demerits for poor behavior. He served as an engineering officer during World War I and worked his way up the ranks to a point where he commanded all land-based aircraft operations in the South Pacific during the Second World War. Over time, Slew proved to be a brilliant tactician and a powerful leader. He was awarded the Distinguished Service Medal for his leadership in the early days of the Guadalcanal Campaign in the Solomon Islands. One of the keys to his success was his abiding faith and respect for those that served under him.

John McCain's father, John Sidney McCain Junior, also known as Jack, began his Navy career following in his father's footsteps. He also had little respect for grades at the Naval Academy and was also constantly getting demerits that threatened his graduation. After his time in the academy, he became very dedicated to his work. John remembered how the Navy consumed almost every one of his father's thoughts and how he worked ceaselessly even on holidays. He and his wife got to know prominent political and military figures as he rose up the chain of leadership. Both Jack and Slew were four-star admirals in the Navy. Jack was Commander in Chief in the Pacific during the Vietnam War when his son became a prisoner of war.

John McCain, the author of this book, followed the path of his predecessors by almost flunking out of the Academy due to poor academics and far less than exemplary behavior. After the Academy, he became a naval officer but was still more intent on partying then working. After a while the thrill wore off, and he be started to become more focused on his work. Like his ancestors, he was dedicated to being part of military action on behalf of his country and was eager to enlist during the Vietnam War. The first carrier he was on became damaged due to an inferno that claims many lives. John was concerned that this tragic occurrence would keep him back from the action, but he soon had the opportunity to sign up for another mission. During his time on the next carrier, John's plane was shot down and he became a prisoner of war. This novel details his experiences as a prisoner of the Vietnamese as well as lessons he learned during the war and from his forefathers.

More summaries and resources for teaching or studying Faith of My Fathers.

Faith of My Fathers from BookRags. (c)2022 BookRags, Inc. All rights reserved.